Scavenging For My Past, Part 2 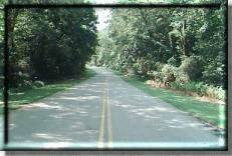 Well, I spent a good part of my morning riding up and down Rivertown Road from Fairburn, Georgia back towards the Chattahoochee River. This is a beautiful, still largely untouched area that in its past was filled with large, working plantations. Prior to white settlement it belonged to the Creek Nation.

Today was my great quest to find the location of my childhood home (see part 1 here). I decided to go slow and carefully look at each house to see if I could identify any characteristics of my former home. If a car came up behind me I pulled off so they could go around. I was on a quest and didn’t want to include unwary motorists.

The scenery along Rivertown Road runs the gamut of small bungalow type homes with small lawns to much larger homes anchored in park-like settings within the city limits of Fairburn. Outside the city limits there are clusters of homes from various time periods separated by rolling pasture land. At different points the trees break and I can see I’m driving along land that is slightly elevated. Below me a beautiful landscape stretches out that entails part of the Chattahoochee Hill County. Great things are going on in this part of Georgia including the efforts of the Chattahoochee Hill Country Conservancy and the Serenbe Community. There are some additional articles about Serenbe and one of its developers and owners owners here and here.

I traveled Rivertown Road its entire length, turned around and headed back towards Fairburn so I could analyze the other side of the road. I was a little let down by the time I reached town and since it was going on 1:00 p.m. I decided to grab a bite to eat and contemplate my next move.

The main town part of Fairburn is what you would expect for a small town along a railroad. There are several antique stores and the only hardware store in these parts that also houses the best boutique for unique gifts anywhere this side of Atlanta. The Southside Theatre Guild took over the old Fairburn movie theatre a few years back and cars fill the streets on nights they perform. Currently they are performing Godspell.

I ate lunch at Oz Pizza---two pepperoni slices and a Coke. Scavenging for your past makes you hungry, you know. As I ate I looked out onto the same Main Street I used to view as a young girl. Across the street from me were the two train depot buildings and on the other side of the buildings ran the track that belongs to CSX. The track originally belonged to the Atlanta and West Point Railroad and runs from downtown Atlanta westward.

I thought about my house and realized if it had been moved through Fairburn they would have had great difficulty making the turn to maneuver onto Rivertown Road. Maybe it didn’t happen at all. Perhaps the information I have is incorrect. The shot of Main Street above shows the right turn where my house would have had to turn in order to make it to Rivertown Road. I don’t think it could.

Main Street through Fairburn is also known as U.S. 29. During the Civil War and for a long time afterwards it was called Jefferson Davis Highway by some. The railroad tracks and U.S. 29 run parallel to each other. These are the same tracks I played on as a child and the same tracks Franklin Delano Roosevelt traveled on as he went back and forth between Washington D.C. and Warm Springs, Georgia. In fact, U.S. 29 leaves downtown Atlanta and travels through East Point, College Park, Red Oak, Fairburn and even further south. It’s common name through my old stomping grounds is Roosevelt Highway named after---well, you know….

Many of the trees are missing now but at one time through East Point and much of College Park there were Dogwood trees planted along the highway next to the train tracks. It was said that Roosevelt loved gazing out at the blooms in the Spring. They were absolutely beautiful as I remember.

This is the front of the courthouse:

This is a shot from the back:

This picture is taken from the front steps of the courthouse looking towards the railroad tracks. That distance is about the same as my front porch was from the tracks.

As I walked the front lawn of the courthouse and snapped these pictures the train you see was moving back and forth as it was changing cars out somewhere up the track. You can’t have lived next to the tracks for all those years and not know what those sounds are….the clinks and clanks as the cars pulled forward, the growl of the engines revving up, and then the engines powering down for the change in direction followed by the engines revving up again and more clinks and clanks.

As I walked down to the end of the lawn I thought to myself, “How many times have you heard that sound during the day or even more eerily in the middle of the night?” Thousands, I guessed. With the sound effects in the background I snapped this picture of the Georgia Historical Marker. There is a better online picture of it here.

As I got back into my vehicle I decided to head up Roosevelt Highway towards Red Oak, the little hamlet that I actually lived in. My next step will be the school I attended from first through seventh grade. Stay turned…..

I have enjoyed your "Scavenging" posts. You've combined family history with travel writing. The photos add a charming touch. Enjoy your summer!

Interesting. Have you much data about your family history? If not, genealogy can be a fun, rewarding and frustrating hobby. I had some ancestors spend a bit of time there in GA., then they moved on to AL., MS. and into Arkansas. They were in Upson Co., in 1830's.

So, Polski3, you have some Georgia red clay in the blood, huh? I knew I liked you for a reason. 1830? Wow, that's early. My dad has researched his family on both sides pretty extensively. I need to go spend some time with him and get pictures scanned and documented in a power point or something to use in the classrom.

Hi there - resident of Fairburn and member of the Southside Theatre Guild (STG) here. I've lived in Fairburn since 1982 and been a member of the theatre there since 1986. I enjoyed your write up of Fairburn - my home. I wanted to make a note that STG has been around for 33 years, and in the old movie theatre building for about 30. Thanks for the entry!

I also grew up in Red Oak just around the corner from you on Spring St.Just reading your blog has brought back some great memories.Just recently i purchased on Ebay an old matchbook from the Sewell Hat factory which was behind out house.Do you remember the old water tower on the property of the hat factory.I remember your old house,and few older house that sat across from the cemetery next to the hat factory.One of my older brothers worked for the lumberyard back in 78-79 after he graduated from Lakeshore.Thanks for the great resd,R.Carmolingo.