I Was Tagged Twice...So Here's Five Things About Me 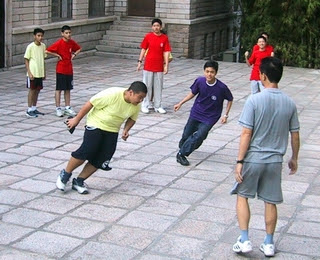 My childhood is repeating itself.

I hated tag when I was in elementary school. I was a little slow and there was always some kid who couldn’t just tag you…he had to tackle you in order to send you reeling into the ground at warp speed. Sometimes I was a little slow to leave the game and durn if I didn’t get tagged more than once by sarcastic little boys. I can only hope the gods that watch over sweet non-athletic girls have exacted their pound of flesh and my tormentors are this very afternoon attempting to haul their fat lazy rear ends up out of their Laz-e-boys to go get another beer as they wallow in debt up to their eyeballs, put up with beligerant kids, and listen to the harange of a nagging, poorly attired wife. No, no….I’m really not bitter.

Well, since before the holidays there has been a little event circulating where tagged people must disclose five things about themselves and then tag others. I discovered The Reflective Teacher had tagged me over a week ago and it would seem that thirty-four years hasn’t really made that much difference except in the manner of tagging. Once again I was a little slow in doing my part and I got tagged again today by Michael over at The Information Literacy Land of Confusion.

I actually appreciate getting tagged because I had dropped off a little in my commenting over the holidays and it’s nice to know folks still know I’m in the game.

So here’s five things about me…..

1. Though I haven’t played seriously since I was in my early 20s I took classical piano lessons from third grade through my Senior year in highschool. My teacher was a member of the National Piano Teacher’s Association or something like that. She was required to present her students each year at the National Playing Auditions where we were judged and therefore she was too. Every year it got harder and harder. When I was in highschool I was constantly practicing for the auditions where I had to play several different movements from classical pieces from Brahams, Purcell, and Mozart from memory. By my senior year I was close to a nervous breakdown and backed out on my teacher. I always felt bad about that.

2. I am not a morning person. I explain this early on to students so their feelings won’t get hurt when I am a little short with them or don’t respond they way they think I might. They know to come in and whisper and get ready for their day without any loud commotion. One year I heard a little boy lean over to the girl next to him and say, “Hey, has she had her Coke yet?” My students understand I have to have my Coke in the morning…..it’s my substitute for coffee.

3. I was the Walmart Teacher of the Year for 2002 in the small town where I teach. This meant so much to me as it was an award voted on by parents and students.

4. I’m actually very shy. I rarely walk up to a group of people even if they are friends without being invited first with a nod or a “hello”. I think sometimes people don’t understand and actually think I’m being uppity or rude.

5. I was an active and overly involved PTA parent for years not only at the school level but at the county and state level as well. I enjoyed it and drive by my son’s elementary school at least once a week with the knowledge that my efforts placed a guard rail between the school and a very busy highway. We really had to fight for that one. I also helped in procuring many of the items on the playground. My paralegal experience helped me complete the incorporation papers for my son’s highschool PTSA since it was a brand new school.

There you have it …five things about me. I will do my duty and tag others, but since so many have already played I will tag them by email.
Posted by EHT at Sunday, January 14, 2007

We are so very similar, particularly in these respects: I hate tag, although probably not more than bombardment; I've won teaching awards in our district which made me so happy; and especially #4. I can't stand coming up to crowds, I get nervous around a lot of people that I'll look silly, and therefore my actual shyness causes me to be construed as stuck up. What a conundrum! Blogging is so much easier, when you can just lay your thoughts out there with little fear of scorn. Or, less, anyway. I enjoyed reading the five things about you, and wish I had the opportunity to teach with you.

I'm a little shy in front of groups, too. When I had to do staff development in November, I nearly fainted. I'd like to be in your classroom.

Gee, I'd like to be in your classrooms. Mine is usually very chaotic, but somehow or another things get done.

For me, its not coke...it is hot chocolate or chai. I can't stand coffee, but need something because I also detest mornings!