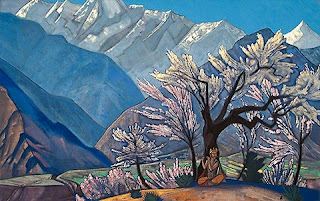 One of the things I enjoy most about a study of history is how things connect. Can you believe the artist of this painting can be connected to a president, a cabinet member, and the dollar bill you might have in your pocket?

This week’s Wordless Wednesday, found here, is a painting by Nicholas Roerich, a Russian artist and mystic. You can see various Roerich paintings here.

Roerich was nominated for the Nobel Peace Prize in 1929 and again in 1935 due to his efforts to create the Pax Cultura or “Red Cross” of art and culture. He was also involved with efforts to obtain signatures to the Roerich Pact in 1935 by members of the Pan-American Union. The Pax Cultura and the Roerich Pact were based on the idea that various institutions including museums, historic monuments, and scientific institutions should be protected during times of peace and war. They would be identified the Banner of Peace which bears the emblem of the Pax Cultura.

Roerich had spent years traveling through Tibet and Nepal searching for the lost city of Shambhala the home of the Ascended Masters. If you aren’t familiar with the Masters then it’s possible you know them by their other name…..Secret Chiefs. What about the Great White Brotherhood? Have you heard of them? Supposedly the Ascended Masters are behind the formation of groups such as the Freemasons, Rosicrucians, and the Theosophical Society. Later Roerich delivered the “Chintamani Stone” to Europe during the formation of the League of Nations stating he was acting on behalf of the Masters. The “Chintamani Stone” was thought to be part of a meterorite with magical properties. Apparently the stone is sent to locations where important events that could alter humanity will take place and then returned when the events are over. Sources state that the Chintamani Stone was returned to Tibet one the League failed.

To understand Roerich’s connection to American History we need to turn to Secretary of Agriculture Henry Wallace who became President Franklin D. Roosevelt’s Vice-President from 1940-1944. Wallace and Roerich met up through the Theosophical Society, and for a time Wallace became very attached to Roerich. He even took to penning letters to Roerich that began, “Dear Guru”.

At this point the story becomes the darling of every Freemason conspiracy theory supporter across the United States. You see it was in 1934 while still serving as Agriculture Secretary that Wallace proposed a new coin that would include the obverse and reverse of the Great Seal of the United States. FDR liked the proposal but decided to place both sides of the Great Seal on the one dollar bill instead. They remain there today. Many conspiracy theorists believe it was due to Roerich’s influence that Wallace, a Freemason, approached FDR, who also happened to be a Freemason.

Today we are amazed at how dirty politics has become. It seems that every election turns into a slug fest titled “how can we get this guy?” It seems that this type of politics is nothing new….

During the 1940 election Republicans threatened to make Wallace’s letters to Roerich public. They relented, however, when the Democrats countered with threats of making Wendell Wilkie’s extra-marital affair public.

Wallace went on to be Vice President and ran for president in his own right during the election of 1948 as the nominee for the Progressive Party. By this time Wallace was no longer writing his guru, however, I wonder if Wallace had been elected would the “Chintamani Stone” been delivered to the White House?
Posted by EHT at Thursday, January 25, 2007

...The Pax Cultura or 'Red Cross' of art...Doesn't Rosicrucian mean 'Red Cross'? Coincidence? I think not! Makes one wonder...!

Henry Wallace was an odd fish: both a Socialist and Capitalist.

As a mystic, he dabbled in all faiths. I suppose today he would be considered, New Age. (Which is where the questionable correspondence figured in.)

Wallace for many years had been closely associated with a religious Eastern mystic whom he called Guru. As Arthur Schlesinger, Jr. explains, "Wallace's search for inner light took him to strange prophets.... It was in this search that he encountered Nicholas Roerich, a Russian emigre, painter, theosophist and con man. Wallace did Roerich a number of favors, including sending him on an expedition to Central Asia presumably to collect drought-resistant grasses. In due course, H.A. [Wallace] became disillusioned with Roerich and turned almost viciously against him."

So in a way Roerich was considered almost a Rasputin.

Wallace was also in favor of sharing atomic technology with the former Soviet Union. (The same sentiment, although more proactive, that caused the Rosenbergs to be executed.)

If he had not 'annoyed' FDR, he would have remained on the ticket as his Roosevelt's Vice President and therefore become President. It is therefore doubtful that he would have dropped the two atomic bombs on Japan.)

Truman was not amused with Wallace's beliefs, speeches, and outright insubordination; Wallace was forced to resign as Secretary of Commerce.

The Chintamani Stone WAS delivered to the White House at the behest of FRD and Wallace. It was placed in a wall (sorry, I don't remember which wall) with the supposed intent of lessening the Great Depression. It was of very little help. It had the same feckless effect when it was supposedly utilized in conjunction with the League Of Nations.

The significance and purpose of the Stone has nothing do with so called "vital" times for the human race, hence it's impotence in these uses. Like everything else, humans have grabbed the Stone for their own purposes. Purposes that are not for the greater good, as humans have no idea what that means.

Roerich may have known all this and had his own reasons for participating in the nonsense. There are always deeper and deeper motivations when human hubris is involved.