MLK: It Should Be About How He Lived 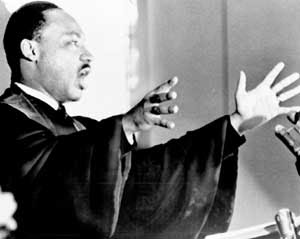 This past Friday my first LA class filed in and many wanted to know about the animated video titled “My Friend Martin”. They wanted to know why they didn’t watch it during homeroom television or why it hadn’t been shown in any of their other classes. “We always see it,” someone stated. I heard others begin to restate the sequence of the video from beginning to end regarding the little boy playing ball and being bullied and told he couldn’t play anymore as if they had memorized it like they do the sequence on their video games.

I wearily took a perch on my stool and simply sat until the room was quiet. It took about three minutes. I told students I was aware of the video, and it is a very good source to learn about Dr. King. I told them I was impressed with the sequence of events I had overhead many of them discussing at their tables, but I wanted to question them a little first before we proceeded with class.

I asked students, “Dr. King must be very important to have holiday named after him. Why is it that we have this holiday?” After several students told me he was important, and he was smart, he helped to free the slaves, he helped African Americans (the student couldn’t tell me how), and he was friends with the president (the student couldn’t tell me which president) I asked, “What did Dr. King do for a living? How did he make his money?” Not one student knew. I continued, “What city did Dr. King grow up in?” No takers. Finally, a young man said, “We remember him because he was killed.” Several agreed with him.

Continually showing the same animated video year after year to celebrate Dr. King’s birthday does not mean students understand who he was and what role he played in Civil Rights. Lessons should be planned in such a way that each year is layered with content that becomes increasingly more challenging as students progress from pre-k through 5th grade (the year in Georgia where Civil Rights is fully explored for the first time).

So my unplanned questioning about their prior knowledge set the stage for my actual lesson. I walked over to one of my classroom computers and maximized a screen I had already prepared. The students recognized the “United Streaming” screen immediately because I’ve used it before. “Ah,” they said, “we are going to watch the video.”

If you haven’t used United Streaming in your classroom, well, what are you waiting for? It takes just minutes to set up an account with your own screen name and password. Searching for videos that fit your content is very easy and you can see whole videos or small segments. I have used small segments and downloaded the links to powerpoints so that when I reach the right moment I simply hit the link and we see a 3, 4, or 5 minute clips that matches exactly what we are talking about. I can set up videos on all of my classroom computers so that students can start the video on their own and watch it as a center-type activity. Videos are easy to preview because I can access my account at home or school. This means that United Streaming can also be used if you need to bone up on any content yourself.

I asked students to have a piece of paper out. They know this means they will take notes. I told them we were going to watch two videos regarding Dr. King. Each video was about 14 minutes long. Students were told to take notes but not to get bogged down with dates, exact names, places, etc. They were to focus on things Dr. King did from childhood through adulthood. The two videos we watched were The Boyhood of Martin Luther King, Jr. and American Heroes and Heroines: Dr. Martin Luther King, Jr.

At the end of the second video there was a little 10 question quiz. I told students to write their answers down and we would see how well they did. The questions involved childhood questions, Civil Rights questions, and even wanting to know what prize he won. In both of my language arts classes over 90% of the students got all 10 questions correct.

After the second video I told students they had just completed a pre-write for writing. Some had a half-page of notes while others had a whole page or more. I told students their writing assignment would be to write a friendly letter to their parent telling them about the videos and what they had learned concerning Dr. King’s life. During the rest of class they began their rough drafts. We will finish them on Tuesday and complete a final copy that will go home.
Posted by EHT at Monday, January 15, 2007

My district purchased United Streaming only to tell us that it uses too much bandwidth!

But I don't let that stop me thought. Yes, it's a wonderful resource.

Wonderful post. Yours is a blueprint for how we should teach children re: the King holiday. It reminds me of what little students know re: Rosa Parks: She was tired, and beyond that, they really cannot tell you more than that.

Thank you for your contribution to the discipline of history and your curriculum for the young ones.

Excellent post! By the way, I'm glad you recommend United Streaminng. It is awesome!

My Lincoln Memorial visit usually is in two parts: by night, Lincoln; by day, Civil Rights.

I was brought up between an upper middle class Jewish neighborhood in New York City and a farm in rural Virginia. I was appalled to find out about Jim Crow during my visits to Virginia and other parts of the south which I equated to the Nuremberg Laws; the Nuremberg Laws affected so many of my friends' parents who escaped or survived the Holocaust.

I described what my own feelings were at the tender age of nine to the students during the visit. I have them recite bits of Dr. King's speech and ask them what relevance his life and actions had on all Americans.

The Martin Luther King Memorial is a reality; the groundbreaking took place last year and the memorial is being built at the Tidal Basin appropriately set between the Lincoln and Jefferson memorials.

Just one bit of trivia: According to the papers that were recently saved for Morehouse College, Dr. King received a 'c' in public speaking at his seminary from his teacher. Either his teacher was not in tune with his student's style, or Dr. King did a lot of work to improve it!

How about reading books? I remember learning about Dr. King in elementary school by--reading a book!

If I had been shown an animated video about Dr. King anytime after first grade, I think I would have felt insulted.

I think bringing the auctioned King papers back to Atlanta was money well spent. We'll be thanking Mayor Franklin for this for a long time to come.

I like your description of the conversation you had with your kids. It's kind of sad that seeing that video year after year registered so little, yet the people who showed it never realized, apparently.

One day, in NYC, we too will have computers in classrooms. I expect I'll be moldering in the grave by then, though.

Our ISP recently acquired the United Streaming. The kids are really loving it. One recently included a video clip, in his Spanish presentation.

I have started setting up various video clips for students to watch as quick individual activities. Since you can download quick stories as well I have students go back to their seats and write up quick reviews of what they saw.

I use United Streaming too and it is great. I have young sons and took them to a Day of Service where that movie was shown. I thought they were to young for it. We have a lot of MLK books in our library but I actually try to spread the love a little to introduce biographies of other African Americans... MLK they get every year at least a bit but what about the rest of the crowd?