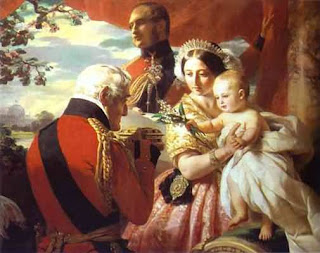 You might be able to name the painting, the artist, and the subjects, but I don't think anyone will know the direction I'll head this week.

Please read this regarding a past image. I need your help.
Posted by EHT at Tuesday, January 09, 2007

I cant name any of that, but what a nice piece of art

I only be happy not to have to wear the lady's dress ! I see myself already in a super market. I don't know the painter it doesn't look like a famous painting to me although I have done art school.
More interesting is your story about the white house. I wonder if some European or Japanese tourist didn't buy it on a flee market perhaps and took it abroad. I'll have a look over here, you never know, the world is bigger than only the States.

Great photo. Can't wait to see where you are going with it.

OK, I'm going to start this off by saying that I think this is Queen Victoria, Prince Albert, and the future Prince of Wales.

OK, I was correct: Franz Xaver Winterhalter. The First of May. The Duke of Wellington Presenting a Casket on Prince Arthur's Birthday. 1851. Oil on canvas. Royal Collection, UK.

Now would this have anything to do with the Trent Affair?

Trent Affair Simultaneously the Union met and survived its first diplomatic crisis of the war, known as the Trent Affair. In the fall of 1861 the Confederacy sent James Murray Mason and John Slidell as commissioners to Britain and France. The two men ran the Northern blockade to Havana, Cuba. On November 7, 1861, they left Cuba on the British ship Trent. The next day, Captain Charles Wilkes of the U.S. vessel San Jacinto stopped the Trent, searched it, and took the two Confederate representatives on board his own ship and later to Fort Warren in Boston Harbor.

The North hailed Wilkes as a hero, but by seizing the commissioners from a neutral ship, he had violated principles of international law that the United States had upheld for 50 years and had even gone to war for in 1812. The British ministry demanded an apology and the release of the two men. Many in the North clamored for war with Britain. Lincoln, however, was cautious, and in England, Prince Albert, Queen Victoria’s consort, used his influence on behalf of peace. After allowing time for the war fever to cool, the United States admitted that Wilkes had acted without authorization, disavowed him, and liberated the Southern commissioners. A war that might have been fatal to the Union was thus averted.

Prince Arthur was NOT the Prince of Wales nor became King so I was interested why the subject of the painting depicted the Duke of Wellington (hero of Waterloo and past P.M.) giving him a gift?

Thanks for the comments so far.

Gattina, I'm glad you are interested in the whereabouts of the White House painting. Please help me get the word out.

Sorry A.M. You correctly identified the paninting, but I'm not heading towards the Trent Affair this week.

I've always loved this painting. She looks so proud to present her son.

Oh, this is too intriguing!

This will be a 'stretch'.

The Crystal Palace is in the background - The Exposition which was opened on May 1st 1851 (the shared birthdays of the young Prince and Duke) which was the first World's Fair.

Many of the exhibits had to do with the Industrial Revolution. Amongst the exhibits from the United States was McCormack's reaper.

(You do realize that I've been reading up on Prince Albert, Prince Arthur, the Duke of Wellington, and the Crystal Palace?

Is this really 6th grade curricula?

Actually, I teach 4th grade. You've come up with some interesting things A.M., but not the direction I'm traveling in this week, and yes.....I could make a connect to my current unit of study and this painting. :)

I fell asleep last night trying to piece together the link between Queen Victoria, the Duke of Wellington and the French and Indian War. Nothing came to me. Can't wait to find out.

This is awful! Germany. The two German Houses (families).
I need to get some sleep, too!
A.M.