An Internet Challenge...Your Help Is Needed 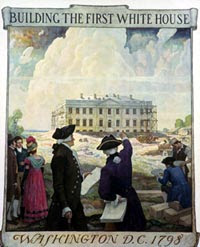 This all started when I was attempting to come up with an idea for a post at American Presidents. I try to post there at least every eight to ten days. As I was looking through the official White House site I stumbled upon the official White House Christmas card and an idea for a post was born. I posted Have You Received Your White House Christmas Card? While I was looking at different cards I came across the Nixon card for 1971 and was simply awestruck by it.

The image for the 1971 cards was different. It was a colonial design showing what appreared to be George Washington with a White House under construction. I’d never seen a painting like it, so I quickly researched it and decided to post the image as my Wordless Wednesday and asked commenters to guess about the picture. Then I would later post about the image and how it was used for an official Christmas card. You can see my postings here where I explain more about this unique painting.

Firefly over at Bioluminescence left a comment that really intrigued me. She found an article from the year 2,000 which explained how the White House and others were attempting to locate the original painting for this image.

It all started in 1930 when the Pennsylvania Railroad, the largest company in the United States until World War I, commissioned the artist, N.C. Wyeth, to complete a series of images for a poster series titled “Building the Nation”. There were supposed to be twelve images but only four were ever known to be completed. Pennsylvania Railroad later became Penn Central and in 1976 was taken over by Conrail.

The White House would love to know the whereabouts of the painting as it is a rare image of George Washington with a scaffolded White House. Wyeth is the only known artist to have painted the White House under construction. Estimates state the painting could be worth well over $1 million dollars.

Posters of the image do exist, however, the original painting the posters were taken from has been lost. The last time the painting was documented was in an Appendix dated 1976 for the Pennsylvania Railroad listing items that were to be turned over to Conrail. The painting was listed as having minor surface damage.

Perhaps someone took the painting home, not realizing what they had, or perhaps it was given as a present at a retirement dinner. While some believe the painting is gone I don’t think so. It’s in an office closet underneath things someone thinks is a bunch of junk. It’s under someone’s bed with all of “Granddad’s stuff” he had when he worked for the railroad. Maybe it’s hanging unceremoniously in someone’s attic.

I need your help to get the word out. Copy this post and put it in an email and send to as many people as you can and ask them to do the same. Place a post on your blog or website. Perhaps one of your readers knows someone who worked for Pennsylvania Railroad or Conrail and knows several other people who did as well. Wouldn’t it be fantastic to tell people you helped to locate a painting that had historical significance plus it was worth over $1 million dollars?

Will YOU join in with this national scavenger hunt?

Information can be obtained through this blog and emails can be sent to historyiselementary@yahoo.com. I am preparing an email to send to everyone I know. If you would like me to send you a copy of the email so that you can simply forward it without reinventing the wheel please contact me and I will be happy to send it to you.
Posted by EHT at Sunday, January 07, 2007

Wow, how exciting. Kind of like National Treasure-meets Antique Roadshow. Wish it was hanging at my house.

It will be interesting to see how your scavenger hunt plays out. I'll be watching!

I have your call posted at:
http://blog.myspace.com/tourgoddess
Tally ho!
A.M. Whittaker

Awww, thats not George, its his stunt double.

I wonder if there is anyone listening to this. Maybe you can make a podcast so that people can send it to radio blogs and they can include it as part of a show! Best of luck

A fun challenge! I have a post written that I will put on my genealogy blog tomorrow and on my main blog late in the week when I generally get more visits.