13 Things About Political Parties in the United States 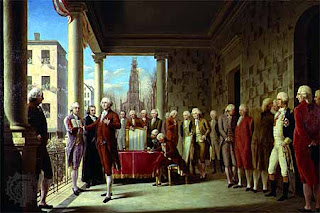 A few days before our break for the cold snap or as the school calendar called it, Spring Break, my history kids and I were finishing up our look at the Constitution.

We had analyzed the Articles of Confederation and determined why they didn’t work, we had eavesdropped on the Constitutional Convention and pondered The Strength of the Triangle, we celebrated with the rest of 18th century America as George Washington was inaugurated as the first president under the Constitution, and we had discussed the formation of political parties due to a huge difference of opinion between Thomas Jefferson and Alexander Hamilton.

This is usually a hard unit to teach with nine year old children, but not this year. Things were going great. Kids seemed to understand the three branches of government. Their performance pieces (mainly reflective writing) were on target. Then of course….the other shoe dropped.

Have you ever run a race, crossed the finish line, and then discovered you had to go back to the starting block? Even having to go halfway back can be a little disturbing.

One day towards the end of our formation of the U.S. government race Mr. Right-on-Target, Brainy Boy, Always-Gets-It Kid seriously said to me during class, “Hey, Elementaryhistoryteacher…is this a political party?”

I looked down to where he was pointing. His text was open and he was pointing to the image I’ve posted here. The image represents George Washington’s inauguration.

Let me explain what happened another way. One of MY students was pointing to an image in the text that contained a caption explaining the picture was the inauguration of George Washington, and I was being asked if the image was a political “party”.

I let out my biggest Charlie Brown cry of disbelief, “ARGHHHHHHHHHHH!”

“Sweetie,” I asked, “do you mean a party like cake, ice cream, and a pinata?”

Oh my gosh…..had we…er….I….missed the mark somewhere. We cleared up the misunderstanding straight away, and had a refresher course on multiple-meaning words, but it just goes to show you that often students are confused. They don’t always speak up, and it doesn’t always come out in their work.

So here are 13 factoids about political parties in the United States:

1. Political parties are not mentioned in the Constitution and are not required in our political system.
2. There are no laws that dictate how many political parties we may have though our current ballot access laws and leadership rules in Congress pretty much limit us to two parties…….third parties just don’t seem to make it for long.

3. Parties ARE regulated by the constitutions of the individual states since they regulate state and federal elections.

4. Even though delegates to the Constitutional Convention decided the Articles of Confederation would not work because too much power was given to the states, the whole states versus federal government issue was still very much an issue even after the Constitution was ratified.

5. Thomas Jefferson, Washington’s Secretary of State, wanted a federal government with limited powers. He did not want the federal government taking away states’ rights. Jefferson also felt the future of the infant nation would grow on the back of her farmers. .

6. Washington’s Secretary of the Treasury, Alexander Hamilton, preferred a strong federal government and strongly believed that the future of the United States would be based on trade and manufacturing.

7. Both Jefferson and Hamilton, of course, were men with very strong personalities and leadership skills. It was only natural for people to side with one or the other.

8. A political party is a group of people who share similar ideas about government. It seems almost inevitable that political parties would form in the infant United States. Anytime you have a group of people meet up the eventually sort themselves in some way. While some travel back and forth between a few of the groups there are always groups of one type or another.

9. People who supported Jefferson’s ideas formed the Democratic-Republican Party. No joke…..even my students could tell me the irony in that particular name based on the current political climate in the United States. As one young lady stated, “We ain’t so united anymore, are we Elementaryhistoryteacher?”

11. George Washington heavily advised against the formation of political parties because he said they divided people instead of bringing them together. Can I hear an amen on that?

Hello!
Very good posting.
Thank you - Have a good day!!!

Awesome list. It's a shame that most adults don't know the information you provide. And that little girl was spot on -- we really ain't so united. :(

I'm Canadian - so this post was very educational for me.

Your illustration interests me. I think the building pictured is St. Paul's Chapel (President Washington's parish church) rather than Federal Hall which is right smack dab in the middle of Wall Street. The church down Broadway that you can see at the intersection of Wall, is Trinity Church, which was being rebuilt at the time of his first inauguration. I believe Federal Hall was of brick.

I don't have the time to do any research now; I have a plane to catch in a couple of hours. Perhaps someone else can - or I shall be there on the 18th and can find out in person!

I'm going to miss you!

Check out my TT

wow!!! those are great and informative list this week! thanks for sharing. i do really learn something new everyday! great idea for this week's T13.

Too funny about the party.

Here in Israel we have a myriad of constantly changing political parties. It's a disaster.

Loved the "party" story. Kids are very literal aren't they?
I found your list extremely informative. I was not aware of some of this. You are never too old to learn (or re-learn) new things!
Thanks for dropping by my T13 and for commenting.

I enjoyed this list. I freelance history articles aimed at students at the 8th to 9th grade level. It's challenging to explain complex events in ways that they will understand. I'm not sure how I'd manage it with 9 year olds even though that is about the age of my boys.

Wonderful TT, I often use your post to make sure I covered everything on a certain topic they are always so informative.

I always learn something here.
LOL at the two meanings of the word party. I am sure at nine party would have only held that one meaning.
Terrific Thursday Thirteen!
My TT is posted.
Have a wonderful day!
Happy TT'ing!
*^_^
(=':'=)
(")_ (")Š
Raggedy

I loved the party nickname "Know Nothings". I can think of a few parties that would qualify to share that name here in Canada.

Ooooo, what a great idea and so informative! Happy TT!

Amazing the things we forget once we're out of school!

"Do you see them drinking coctails and eating potato chips????" That's what I would have asked my students! I try to anticipate when multiple meanings of a word can get in the way of student understanding. And that is one I have dealt with. When I introduce the term "political party" I always say "political party....hmmm that must be when..." Then I look at them funny until someone finally corrects ME! Humor can be a fun way to adress thes multiple meanings. Thanks for posting this. I plan to share it tith my students. -Bob J.