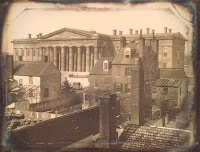 The picture I posted for this week’s Wordless Wednesday is an image of the U.S. Patent Office. I’m not sure what year that picture was taken, but the image you see to the left was taken in 1870.

The building is now known as the Old Patent Building. The Smithsonian took it over and today it houses the Museum of American Art and the National Portrait Gallery.

The patent office figured greatly with another article I posted this week titled William Thornton: A Capitol Life. Thornton was the superintendent of the patent office. Thornton did not get to serve in the magnificent building you see above. During Thornton’s tenure the Patent Office was located in a building known as Blodget’s Hotel. Today a well known structure called the Tariff Building is located on the spot where the hotel was located. It is directly across the street from the lovely Old Patent Office.

When the British invaded Washington D.C. during the War of 1812 they burned the White House, the U.S. Capitol, and most other government buildings. Thanks to William Thornton who was one of very few government officials still in Washington as the British marched into the city the patents and other important papers in the Patent Office were saved from the torch.

Thornton persuaded the British not to burn the building because of the importance of the building's contents not just to America, but to the world in general. Another reason why Thornton should be remembered for saving the Patent Office is Congress needed a place to meet after the Capitol burned, and Thornton made the Patent Office available.

The home you see here is known as the Tayloe House originally owned by Col. John Tayloe of Mt. Airy Plantation. During the early days of our nation he was known as Virginia’s largest landowner. His friend, George Washington, had convinced Tayloe a man of his social standing would need a house in 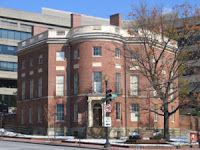 the new capitol city so he hired William Thornton to develop a plan. Today this house is also known as the Octagon House and is currently owned by the American Architectural Foundation.

The Tayloe House also has a connection to the War of 1812. Following the destruction of the White House the Madisons needed a place to serve as the Executive Mansion. Col Tayloe offered his home and the Madisons accepted. The Treaty of Ghent which ended the war with Britain was signed by Madison in the circular room above the entrance.
Posted by EHT at Thursday, April 19, 2007

please explain what wordless wednesday is for me? I'm newto teacher blogs and I don't quite get it. Thanks a bunch.

I walk by the octagon at least twice a work day.

Proverbs, I left the link for you to follow to learn more about Wordless.

Sherpa, I don't know how I would live a normal life walking by all of that history. I'd never get anything done!