At His Father's Knee 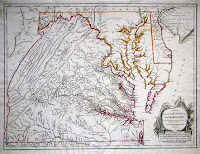 Many schoolchildren across our fair country learn about the Louisiana Purchase followed by the Lewis and Clark expedition. I agree with that sequence of study. Those two events did follow each other chronologically, however, our collective interest in the west began much earlier, and Thomas Jefferson’s interest in exploring the west began much earlier than 1801. I contend that Jefferson’s love of the west….an area he never visited…began at his father’s knee.

We learn many things at our father’s knee---how to ride a bike, how to shoot a basket, and in my case I learned how to drive a tractor and plow a straight line. Thomas Jefferson was no different and it was from his father and father-type figures in his early life that he became facinated with the western frontier.

Head on over to American Presidents for my newest article about Thomas Jefferson and his quest for exploration of the west.
Posted by EHT at Tuesday, April 03, 2007

Anonymous said...
This comment has been removed by a blog administrator.
8:02 PM

I hate it when people post comments that are just tag words to get their website noticed.....

I agree with your comments on Thomas Jefferson. Upon visiting his home at Monticello, I am amazed at the many historical artifacts, portraits, etc.. that he collected. He was a truly interesting man! I know it seems silly to say, but I would love to have the opportunity to sit down with some people like Mr. Jefferson and just pick their brain about a million questions that I have. I love teaching about Thomas Jefferson to my third graders. Anyway, I enjoyed this post. I am new to blogging, and love finding sites like your own.