13 Things I'm Doing at the Beach 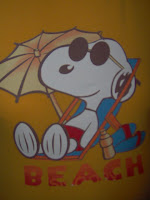 1. Not cooking! It’s not that I hardy cook anymore anyway…if it wasn’t for Dear Hubby we’d all starve, however, our condo has a wonderful kitchen that could even inspire me to cook in. This week though… breakfast and lunch are self-serve.

2. Gazing at the beach from a lovely reclining chair though a cold front has moved in and it’s a bit chilly….no suntan today.

3. Exploring beach stores with plenty of tacky crap ( there’s no other way to properly describe it). Who buys all this stuff? But it’s one of those ingredients to the beach that makes it so interesting.

4. Soaking in the local color---I love beach towns and Gulfshores, Alabama has so many colorful, beautiful beach homes. It’s hard to believe that Hurricane Ivan destroyed most of it a few years ago, however, there is still some evidence.

5.Collecting memories of birds, dolphins arching up out of the water, tiny fish that can be seen in the surf, and don’t forget the shells!

6. Eating…restaurants abound and dinner is out each night. Hopefully we will get to Lulu's at least once for lunch.….the owner is Jimmy Buffet’s sister.

8. Watching Goofy daughter and giggling at her----while secretly wishing I looked like her and could do some of the things she can do----Ah, youth!

9. Being full of gratitude that Dear Son is with us as well on this trip---because of schedules, choir trips, trips with friends, etc we four have not all been together in like forever. I guess he really does like us!

11. Fort Morgan is down at the tipof the island. It was built after the War of 1812 and was named for Daniel Morgan, the Revolutionary War hero. It served as a training base during World War I, however, its main claim to fame was during the Civil War when Union Admiral D.G. Farragut lead a fleet to close the bay. During the attack, the U.S.S. Tecumseh struck a mine, and in the confusion, the fleet hesitated under the guns of Fort Morgan, prompting Farragut to order "Damn the torpedoes, full speed ahead!". The fort continued as a coast artillery post until after World War II. You can learn more about the history of Fort Morgan here.

13. This area was featured on the news continuously as Hurrican Ivan bore down on the coast. You can see Hurricane Ivan damage photos here.

14. History legends abound….Gulfshores is part of Baldwin Couny, Alabama. Early in her history there are stories that a Scotsman reached the shores of North America 300 years before Christopher Columbus. Read about this facinating story here.
Posted by EHT at Thursday, April 05, 2007

you must be having a blast!!!! great T13 list for this week.

I love the beach! I'm so glad I live near the sea... Interesting links too.
My TT is about oracle decks I own.

We're heading to the beach tomorrow for a holiday picnic with friends, but a week away sounds like much more fun.

You really saw dolphins swimming wild? How incredible that must be.

I wish I was at the beach. Thanks for sharing your adventures so we can imagine we were there too!

Have a great vacation! I hope the cold front passes soon and you do some great writing. (of course!)

Ah, the beach! Wish we were having beach weather here. No luck on that! It's 35 with 45 mph winds! That means COLD!

Hi--glad to see that you found my hurricane photos and linked to them. Sorry it has turned chilly here during your trip.

It sounds as though you know how to make the best of a wonderful situation! Enjoy...and come back refreshed!

I am so happy that your Dear Son is with you. We took ours on Spring Break as well, and there is nothing like the family together. I love the shore as well, and I can just imagine you rested and shell-searching. Have a wonderful break.

Anonymous said...
This comment has been removed by a blog administrator.
6:18 PM

Unknown said...
This comment has been removed by a blog administrator.
2:52 PM

Katherine, I've deleted your comment twice. Please do not leave another. I love comments but not those that are devised simply to draw traffic to a business blog. The fact that your profile is not available and the fact that your site simply wants information from the folks that visit it cause me to believe your site is not one I want to be linked to....it is also strange that you knew I had deleted your comment even though it had been sometime since you had left it.

If you really want to drive traffic to your site find blogs you are interested in and leave meaningingful comments on them regarding the person's post. Folks will then want to visit your site and believe me....they will find it through you profile.

My blog is not a billboard for advertising unless I choose it to be.

Anonymous said...
This comment has been removed by a blog administrator.
11:46 PM

The information of this site is really important since it counts on specific details for interested in real estate.

country and contributes great benefits for the tourism, business that offers many economic advantages for the

country. The increase of real estate in Costa Rica during the last years is the test that Costa Rica in one of the

destinies more looked for by the foreigners eager to invest in this point of exuberant beauty of flora and fauna. I

also count on information referring to the subject.

rica. Visit us for more info at: