Advancing Towards the Trail of Tears 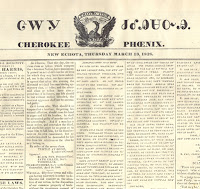 We used a couple of days leading up to “the test” to take a look at the Trail of Tears.

Many of my students visited New Echota, the Cherokee capital prior to 1834, during a field trip last year and many have vacationed in Cherokee, North Carolina. I use this information as a hook to get kids interested in our current topic by having them remember the details of their trips to these Cherokee landmarks.

However, it has been many moons since August when we discussed Native American regions, so we reviewed first about the Cherokees and how they lived in the Eastern Woodlands of North America prior to the arrival of Europeans. Then we clicked our fast forward button and discussed Sequoyah and his Cherokee alphabet, the Cherokee newspaper, The Phoenix, and I showed students various pictures of Cherokee villages and gatherings. I also wrote a list of names on the board and titled it “Important Cherokee Leaders”. The names on the list included Col. Ridge, James Vann, and Charles Hicks.

I asked students to carefully look at the images and the list of names and make some observations. They quickly surmised that the Cherokees in the pictures were dressed like white men, the men on the list did not have names that sounded Native American, and that villages looked more like towns with buildings that resembled other colonial settlements.

One student remarked, “Gee, you can’t tell they are Indians at all.”

Were my students operating on stereotypes?

I would have to say they were.

Of course I can’t blame them. Young children are constantly inundated with solitary images of Native Americans wearing feathers and living in a teepee. One or two lessons a year to change their way of thinking isn’t going to be enough, but I try.

Now I don’t mean to mislead anyone into thinking that I allowed my students to think that all Cherokee tribal members assimilated into the European culture. Prior to European exploration the Cherokee Nation was a well organized, peaceful tribe that had a form of government, religion, and education. They were a highly developed civilization. There were many who did not choose to follow and highly objected to any white habits and customs. On the other hand there were many who had a lifestyle similar to whites yet followed the practice of polygamy and looked first to Cherokee law before following state laws.

Once white traders and hunters began to travel through Cherokee lands, however, many mixed unions between Englishmen and Cherokee women took place. During the days of his presidency George Washington asked Henry Dearborn to introduce certain facets of technology to the Cherokee such as spinning wheels and carding machines. Young chiefs such as Col. Ridge, James Vann, and Charles Hicks known as the Cherokee Triumvirate understood that peace could come through education, technology, and business sense. Other Cherokee leaders such as John Ross and John Walker agreed with them.

With so many pushing for assimilation it seems it was inevitable, and the very fact that their journey towards assimilation was so successful makes the fate of the Trail of Tears just that much more repugnant and regretable.

In order to continue my student’s journey through the Trail of Tears take a look at the next portion of my lesson I’ve detailed in my post titled The Chief Vann House: Stamping Out Stereotypes over at Georgia On My Mind and stay tuned for more about the Trail of Tears.
Posted by EHT at Sunday, April 22, 2007

Very informative-- and on a subject close to my heart. But my Scots- Cherokee ancestors would be shocked to be called part "English."

I stand corrected there...:)