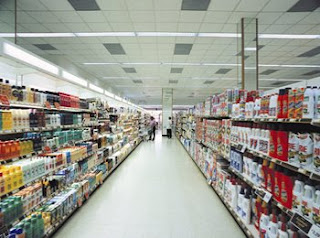 In case you aren’t sure this is a grocery store aisle. How does this image fit in with my theme? Leave me a comment.

You can find other wordless images here.
Posted by EHT at Tuesday, March 18, 2008

The grocery story and the theme of a great nation? Perhaps the abundance? We have so much to choose from.

Plenty, variety, clean, sterile, streamlined, and accesible to all.

I know I have already left a comment, but the photo has stuck in my head and I have a few random thoughts.

I grew up between New York city and rural Virginia and most of my shopping has been away from large supermarkets.

Each neighborhood in New York is like a village and there are bakeries, green-grocers, butchers, fish markets, and other specialty food stores. We got to know all the merchants and met our neighbors there. There was always discussion of the best produce, cheeses,sales, as well as gossip, news, and political opinions. There was always a good aroma in these shops and the merchants were generous with samples.

In Virginia, we visited neighboring farms and bought fruit and vegetables (which we sometimes picked ourselves), as well as pies, fish, and other goodies. The supermarkets were for paper goods and other necessities.

I find that I am shopping more in smaller, mom-and-pop specialty stores and asian markets as well as looking forward to the many farmers' markets. I like the sense of community as well as fellowship these places provide. (And I have enjoyed so many products not available in chain stores.)

The photo above is a bit scary to me; it represents sterility and there is no real indication where these products really come from. I tend to shy away from such places and make only necessary purchases there.

This picture and the theme behind it reminds me of a story that was printed in an old issue of The Reader's Digest, which my parents related to me:

When Russia was still under the reign of the Soviets, a Russian woman who immigrated to America accompanied a tour of America. When showed the statues of the leaders and statesman and heroes of America's past, she said, "Ours [the Soviets'] are just as good." When shown the fine architecture and landscape of America, she still insisted "Ours are just as good." America's technology, numerous libraries and centers of education, could not make her change her opinion.

But then she was shown the American supermarket, with isles stretching (like the one in this picture) nearly as far as the eye can see. It is said she broke down and wept, for the people of Soviet Russia would never dare dream of such abundance.

'Tis a moving story. I am not sure if it is literally true, but this picture reminded me of it, and I thought I would share it.