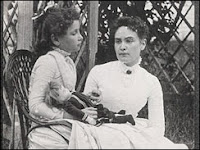 One of the first historical figures I read about as a young child was Helen Keller. Her story is an excellent example to share with children regarding overcoming great difficulties.

When I have tried to figure out the right combination of strategies to communicate with an autistic child I’m often encouraged by the courage and determination of Miss Keller’s teacher, Anne Sullivan.

The picture with this post is a brand new one recently found showing Helen Keller and Anne Sullivan. It just may be the earliest picture of the two together. Miss Keller is probably around eight years old. You can read all about it here.

As an adult Helen Keller was very involved in politics and social issues. Textbooks covering women’s issues usually mention Helen Keller, but rarely go into much detail because of her radical (some for the time period) ideas. Besides her involvement with Helen Keller International, her non-profit organization for preventing blindness, she also worked as a suffragist, spoke out against war, and supported birth control (a very radical idea for the times).

She was one of the founders of the American Civil Liberties Union in the 1920s and was a known radical socialist. As a member of the Socialist Party she campaigned for Eugene V. Debs when he ran for president.

I’m glad that in today's classrooms students can access resources that explain the whole story of Helen Keller’s life….not just a cleaned up version that meets someone’s idea regarding what a good American looks like. Helen Keller and other high profile individuals who lived during the early part of the twentieth century are perfect examples for students to analyze the life choices historical figures made along with actual historical events and social issues of the time.

When examining a historical figure it is helpful to dig a little deeper to understand why someone makes the particular life choices they make. Putting events and life choices in context with the times being studied help to build critical thinkers, and that should always be the ultimate goal in a study of history not a regurgitation of causes, effects, and dates.
Posted by EHT at Thursday, March 06, 2008

It should also be noted that, when she spoke to the Lions at their 1925 convention, she inspired the organization to become "knights of the blind". To this very day, Lions Clubs still have blindness treatment and prevention as their primary charitable focus.

I enjoy reading your history blogs and look forward to each one.

Thank you for supporting my roadgeek blog.

I saw this wonderful photo in our paper yesterday. Pretty neat stuff.

Thanks, Ga. Road Geek for adding more info about Keller. Many of my students have benefitted from the Lions Club eyeglass program.

Your addition proves that there is so much more about Keller that many people don't know.

Hi June. I saw an article last night about the picture and hurried to get a post up. No telling what people across America have in their attics and basements that would send people like me into historical frenzies! :)

I too saw this picture and read the article about the photo and Helen Keller.

Every high school I've ever worked in works for the Lions and the eyeglass program. In my current school, we have a lot of students that come from low socio-economic families and the Lions program has had a HUGE impact in the community.

You might be interested to know that Helen Keller and her two teachers' (Anne Sullivan and Polly Thompson) ashes are inurned in the columbarium inside the St. Joseph of Arimithea Chapel in the Washington National Cathedral in Washington, DC. They have a bronz plaque in braille on the wall in the chapel as well as a piece of sculpture (carving)in the nave, so that the sight impaired can get an idea of how she looked.

An interesting last resting place for a 'humanist'.