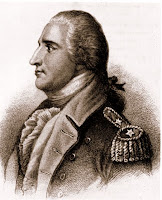 Last Wednesday's wordless post was an image of a monument that stands today on the battlefield at Saratoga. The monument is a boot with no inscription at all. This is understandable since the monument is in recognition of an injury Bendict Arnold, a name synonymous with betrayal, received during the battle of Saratoga in 1777.

Georgia state standards mention Benedict Arnold by name so he is definitely someone I bring to the forefront during our exploration of the American Revolution. I generally bring him up by asking students, “What’s a Benedict Arnold?” I generally have five or six hands go up, and usually they all know that the name refers to someone accused of betrayal. Having gotten that out the way we begin to wonder why an officer in the Continental Army could be accused of betrayal, and if he did betray the Patriots what could have caused him to do it. After brainstorming and listing our ideas on the board I show students the same image I posted for Wordless Wednesday. Students have some of the same reactions many of my readers did….it’s a boot, why a boot? Perhaps it’s a fire hydrant, and finally….what the heck is that?

Benedict Arnold had accumulated several daring feats during the early battles of the war. He played important roles at Ft. Ticonderoga, the fantastic invasion of Canada including the siege of Quebec, and the Battle of Valcour Island in 1776, followed by the Battle of Saratoga in 1777.

The Battle of Saratoga is another important event the Georgia standards highlight so I try to meld the two…..the battle and Benedict Arnold… together in my lesson. Ben Franklin and others had been in France for awhile before the Battle of Saratoga attempting to gain an alliance with the French government. The Continentals needed French money, soldiers, ships, and guns to help them wage war on the British. The French had hung back, however, from making a decision because they weren’t so sure the Continentals had what it took to defeat the British.

The Battle of Saratoga was a huge victory for the Americans and was the turning point the French needed to finally agree to an alliance. Benedict Arnold was one of the key players in the victory at Saratoga. One of his soldiers wrote later, “He was the very genius of war.” During the Battle of Freeman’s Farm Arnold’s leg was gravely injured as he attempted to lead an attempt to block British forces, and matters didn’t improve when his horse fell on it. His leg was ruined, but he would not allow it to be amputated.

Students generally are surprised and confused that Arnold eventually hatched a plot to virtually hand over the Hudson River Valley to the British. Many question why a valiant soldier would do such a thing. There are reasons for it, however. For one thing he probably wasn’t too happy to know that his efforts to win the Battle of Saratoga resulted in a French alliance. Arnold hated the French. Many sources indicate the hatred stemmed from the French and Indian War when during the Battle of Ft. William Henry a large number of prisoners were set upon by Native Americans who were French allies while the French regulars simply stood by and did not attempt to stop the carnage.

Arnold also had his feuds with the Continental Congress over expenses and promotions. It seems they never fully recognized any of Arnold’s exploits and continually passed him over. Problems between Arnold and Horatio Gates kept Arnold from getting the recognition Arnold and others thought he deserved following the Battle of Saratoga. During the invasion of Canada Arnold nearly bankrupted himself by paying for many of the army’s expenses. He was constantly rebuffed when asking for repayment. By this point he was also facing corruption charges from some of his actions at Ft. Ticonderoga. Students quickly realize Benedict Arnold was not a happy man as far the Continental Army was concerned. I make no attempt to excuse Benedict Arnold’s actions. My purpose at this point of the lesson is to get students to analyze the actions of a historical figure.

After the British were removed from Philadelphia Arnold was installed as the Philly governor. He became very involved in the social scene while he was court-martialed by the army for malfeasance. He also married Peggy Shippen who had been courted by British Major John Andre when the Redcoats held the city. If that name sounds familiar it should. It was Andre who was involved in Benedict Arnold’s betrayal. Andre was caught and executed by the Americans. Arnold was able to get away and lived the rest of his unappy life in Britain.

I end my lesson by circling back to the beginning. We look back at the brainstorm list student’s responses created. We analyze where students got it right and mark out the incorrect items. I then ask students to summarize what they learned in the lesson by writing a few lines in their notebooks. For those that give me a puzzled look I restate my directions differently by giving them an exact prompt, “The most important/interesting thing I learned today is…..”

You have some great stuff, EHT! I hope some of those who think we don't do anything to teach kids to think are checking out your post.

Thanks for all the wonderful material for discussing Benidict Arnold.

I remembered the basic outline of his story but I'd forgotten some of the specifics.

Have you seen the wonderful video about Benedict Arnold and George Washington? Kelsey Grammer is Washington and somebody cute (sorry) is Arnold. It was a fantastic but gruesome.

Anonymous said...
This comment has been removed by a blog administrator.
8:21 PM

I love reviewing U.S. History through your site!!! The most interesting thing I learned was the fact that Benedict hated the French.

Would you be interested in sharing some of your students' responses?

I've just learned that some comments can be off point and too long!

Seriously, I had not heard of the leg injury!

I knew all of the other information. I shall also be in that area, as well as USMA West Point, with a group in April and Benedict Arnold will be part of my bus commentary. Now I have an added tidbit, thanks to you!

(Perhaps I'll send you a photo of a chain link!)

Unfortunately the statements the students wrote are in their notebooks. I walk the room and look at many and a few usually volunteer to read their their statements. Most wrote about the boot monument itself. They thought it was funny looking. Some wrote about how everyone was glad the French had finally said they would help, but one person didn't like it and changed history by his actions. Other students focused on what happened during the French and Indian War and wondered just how bad it must have been for Arnold to hate the French as much as did.

When you are teaching the French and Indian War it's helpful to lay the groundwork for students by talking about the episode with the French and their Indian allies....then students have prior knowledge when you get to Benedict Arnold.

Actually, being a history neophyte, I wasn't even aware of Benedict's great victories. The most important thing I learned today is to give people credit for their accomplishments or they may turn against me.

Good article on Benedict Arnold. I do have to say, however, that there is an inscription on the Boot Monument at Saratoga. I know because I climbed through the poison ivy to read it. It says, in part, "To the most brilliant officer in Washington's army...." and is quite lengthy. If you contact the national park service, or just do an internet search, you can probably find the entire quotation.