During October and November I read Frindle aloud to students. If you aren’t aware Frindle involves a fifth grader named Nick who through a series of events ends up inventing a new word for an already exisiting object. Nick invents the word frindle to replace the word “pen”. The rest of the book follows the journey of frindle as it eventually becomes a working member of the English language and ends up in the dictionary.

Read alouds in my class are not moments of free time. Students are given a purpose for each daily reading session. I have a question for them to ponder as I read, I ask them to be ready with predictions, or I ask them to create illustrations as I read. For example, currently I’m reading The BFG by Roald Dahl. Today my students drew a phizzwizard (good dream) or a trogglehumper (bad dream) while I read a chapter that described other dreams.

So, back to Frindle…..after we read the book I have always asked students to come up with an invented word. Since a frindle is a make-believe invented word (at least I don’t think it’s in the dictionary yet…) I like to give students several real examples of invented words that have eventually found their way into our vocabularies.

The word quiz was one word I shared with students. This is courtesy of word origins.com. The story goes that in 1791 a Dublin theater owner named James Daly made a bet that he could introduce a word into the language within twenty-four hours. He then went out and hired a bunch of street urchins to write the word quiz, which was a nonsense word, on walls around the city of Dublin. Within a day, the word was common currency and had acquired a meaning--since no one knew what it meant, everyone thought it was some sort of test--and Daly had some extra cash in his pocket.

It's a fun story. Unfortunately, there is absolutely no evidence to support it and the term was in use prior to the alleged bet in 1791.

The first appearance of the word is from 1782 and means an odd person. This sense survives today in the word quizzical. It later aquired a meaning of to make fun of, or to mock. How it acquired its current meaning of a test is unknown, but that sense did not appear until 1867 and then it was in the United States.

The OED2 has a cite from 1847 where the word appears: "She com back and quiesed us," which could be a clue to its origin. Quiz as a test could be a corruption of the Latin Qui es, meaning "Who are you?" American Heritage says it may be from the English dialect verb quiset, meaning to question. In any case it is probably from the same root as question and inquisitive.

Students enjoyed the story behind the word quiz and were ready to try their hand at inventing a new word. We brainstormed a list of 10 words that are very common to a school campus such as teacher, paper, folder, pencil, textbook, etc. Students had to check dictionary.com to see if their word existed, and had to create a poster to tell others about their word. The poster had to have the new word, the word it replaced, an illustration of the new word, and the new word used in a sentence. Like this one: 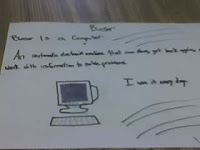 Once we had all of the posters done students evaluated each one. They were looking for the invented word that was easy to say, that had eye appeal, and the word that they themselves could support by using it in their own vocabulary. In one classgroup students whittled their choice down to the word “binser” while my homeroom liked the word “fwinke” (it rhymes with twinkie).

Through a huge brainstorming session where students worked in small groups they determined strategies they would follow to get their words recognized by the public and encourage people to use them. The first thing students did was to make posters with the word only. Then they made smaller mini-posters and placed one in each staff member’s mail box. Everyone is wondering what is going on.

This week students have been making teaser announcements on homeroom television and next week small teams of students will go into different homerooms and present information about the words to every class. Articles will make an appearance in the school newspaper as well. We also plan to hook up with other fourth grade classrooms across the country and email them about our w 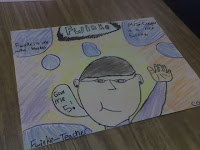 ords. We want kids of all ages across the country to help us use these words.

It’s amazing what students will come up with when you allow them an open-ended activity. Eventually we will have a website for students to nominate their favorite fwinke….maybe even a “I love my fwinke” t-shirt.

Well, a fwinke is a teacher, and a binser is a computer. What else could they mean?
Posted by EHT at Saturday, February 03, 2007

How should I have known about this? I'm a muggle, not a fwinke!

I have always resisted reading aloud to my students thinking that they are now in 8th grade and they should be reading on their own. Then it hit me that from time to time I really enjoy listening to "books on tape" (err...CD) so maybe they would like it.

So now during homeroom on Tuesday's and Wednesdays I read aloud a book that relates to what is being taught in either LA or SS and the kids LOVE it and really get into it.

I have to tell you, it was a little rough starting because it definitely takes some skill to read properly outloud and have the inflections make sense.

Good to know I am a Biology Fwinke and I love to use the binser!

That's awesome! I feel so much better about all the words I make up now. ;o)

I knew this ONE!! I remember reading Frindle to my 7th graders after I recommended it to a particular, precocious one who I know will do well in life. Blogger wasn't letting me post or comment
:(

Strausser, when I was taking my Elementary Lit. class to become a teacher my professor read aloud to us every week. Everyone in my class was over the age of 30 and this 20-something prof was reading Bridge to Terebithia to us. When she read the chapter when a character dies there wasn't a dry eye in the place. I think all grade levels could benefit from a read aloud. I'm glad to see you realize it too.

I always pre-read any chapter book I'm going to read aloud. I make notes to myself regarding certain passages and sometimes I even delete a word here and there if it might cause too much noise from the peanut gallery. I also tend to read many of the same ones year after year so I know the material and can get dramatic with it.

Ms. Q, I suffered from blogger block this week too. I hope this blogger contrariness is almost over.

Thanks for visiting Holly and Ordinary Mom

Women on the Verge said...

I love Andrew Clements! And when I taught junior high I used to read aloud all the time. I found it really helped with fluency.

Kudos to you on your teaching methods!! If my daughter had had the benefit of a teacher like you, we might not have had to pull her out of public school...

What a fun activity! People make up words all the time--and some actually stick.

I don't read to my students very often. My voice gives out by the last period if I attempt it. They do enjoy listening to audio versions sometimes. You're right, though, who doesn't like to be read to? I read a story book to one of my high school classes a few years ago, and just before I started, they suddenly got up our of their seats and rushed to the front of the room. Freaked me out! They simply wanted to sit on the floor at my feet like the did "back in the day." Kind of cool, but sad, too!

I'm not a fwinke but I do get annoyed with my binser from time to time. I love what you are doing with your students to get them to use their imagination and improve their listening skills. I'm a closet history geek. I'll pop in again to see you. Cheers

Good Evening. I just bumped into your blog while roaming around. I'll be checking back again. I just wanted to tell you that I started a new blog recently that you might be interested in. I teach gifted kids and have done a lot of work with primary sources, so I decided to start a primary source blog. You can see it at http://averyoldplace.blogspot.com

Great strategy and a wonderful book. The 5th grade teachers at my school have been reading Frindle the last couple years. I'll have to get them to share the words their kids have created with your students...but I'm still struggling to get them into the blogging world. They would really benefit from the dialogue with a another exceptional fwinkle like yourself.