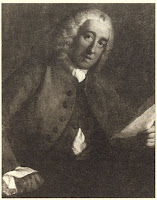 When attempting to learn more about certain figures in history I find it helpful to look at the people who were involved early on in the life of the historical figure. For example, I believe many historians would agree that Abraham Lincoln’s stepmother, Nancy Hanks Lincoln, had an unbelievable influence in his life. Lincoln himself said so.

The man featured in this week’s Wordless Wednesday had great influence over one of our Founding Fathers….some might say our greatest Founding Father…Thomas Jefferson.

My focus this week was Francis Fauquier who served as Lieutenant-Governor of Virginia from 1758 to 1768 due to the absence of Governors John Campbell, fourth Earl of Loudoun followed by Sir Jeffrey Amherst. This was a normal practice as appointed governors rarely ventured over to the colonies. During his administration Fauquier dealt with the French and Indian War and subsequent Indian raids on the frontier. Fauquier was successful because he often ignored orders from London in order to effectively address the issues of Virginia. Even though he had sympathies with the colonist he dissolved the House of Burgesses after they issued a resolution regarding the Stamp Act.

Fauquier was exposed early on to great thinking as his father, Dr. John Francis Fauquier travelled from France to Britain to work with his friend Sir Isaac Newton. By the time Francis was in charge of Virginia’s government he knew all the social graces of the time, he was an academic, an amateur scientist, musician, and had inherited a modest fortune at twenty-three. He also drank sometimes to excess and loved to gamble and attend the races.

By the time Fauquier was in charge of Virginia’s government his children were grown. He and his wife enjoyed many social occaisions such as lavish dinners and concerts in Williamsburg, and they were known to invite many of the young men and professors from William and Mary to their levees.

Some of the attendees were Dr. William Small, a teacher of Natural History, George Wythe, an attorney and law professor, and their student protégé Thomas Jefferson. At these dinners Jefferson enjoyed the company of three of Virginia’s greatest minds----Small, Wythe, and Fauquier. It makes one wonder if Jefferson had not been invited to these dinners would his thoughts have taken a different turn later on.

How fortunate for humanity was Small’s success in instilling that spirit in his young student. He opened Jefferson’s mind to the wisdom of Bacon, who proclaimed the universal power of reason and to the compelling claims of Locke, who argued with cool reason and crackling passion that only the consent of the governed legitimizes the exercise of public power.

Small saw to it that Jefferson’s education in state craft was not limited to books. He arranged for Jefferson to be invited to small dinner parties hosted by Governor Francis Fauquier and often attended by George Wythe, the Colony’s most brilliant legal mind. The lively political conversation at the Governor’s table taught Jefferson to appreciate the complexities the ironies and the absurdities from which the art of governing in his or any other age can never be separated.
When Jefferson chose the law, Wythe succeeded Small as friend and mentor. Like Small, an intellectual child of the Enlightenment, Wythe taught Jefferson to revere Lord Coke, whose life vividly and whose commentaries powerfully taught the supremacy of law, supremacy to which even a king must kneel.

History is testament to the transforming power of William Small and George Wythe, that hot summer day in Philadelphia when his colleagues, and I think destiny, summoned him to give eloquence to their convictions, persuasive power to their inward confidence and wings to their sacred honor.

It is clear that Small and Wyeth provided the tutelage while Fauquier provided the stage for Jefferson to practice his lessons while engaged in lively conversation.

Eventually Virginia named a county for Francis Fauquier carved from the lands of Prince William County. I find it ironic that I began this essay with a reference to Nancy Hart Lincoln and I’m ending with another. You see, Fauquier County, named for a mentor of Thomas Jefferson is the birthplace of Abraham Lincoln’s mentor, Nancy Hanks Lincoln. She was born in Fauquier County in 1784.
Posted by EHT at Friday, February 16, 2007

I'm confused and not sure that I should hang my head in pure shame.

I had looked up Francis Fauquier! (I'm a virginian who now resides in Alexandria, but for several years lived in Upperville which is on the border of Fauquier and Loudoun.)

I discounted fauquier since the image I had was not a match to the
portrait that I had. My Fauquier is of a far different man! I looked back at the images and finally found yours way down the line. (Naturally I trusted the first few I had seen.)

Could the Richmond Times Dispatch been so mistaken?

Or did I get father and son mixed up?


This comment doesn't seem to accept the html and the url is too long so you can see what I mean. I may post it on my site as an intellectual exercise.

When you simply search the first and last name you get very few images of Fauquier. You end up with many images dealing with Jefferson......

Dr. John F. Fauquier was an assistant/deputy to Newton when he was in charge of the mint. I found no images indicating they were him. There may be none on the net as far as I know.

Google images gave two resources for the image I used. One page was the website for the history of the Eastern State Hospital with a virginia.gov suffix. The picture at that site is the same one I used and has a caption "Governor Francis Fauquier, Royal Gov. of Virginia" The other picture is from a website with wvu.edu as the suffix. The same image is used in a biography of Adam Stephens.

The young image you refer to is also used at Wikipedia. I believe they are both of the Lt. Gov. but were produced at different stages of his life. I elected to use the one that portrayed him as Jefferson would have seen him at their dinner parties.