A Man Who Garners Respect 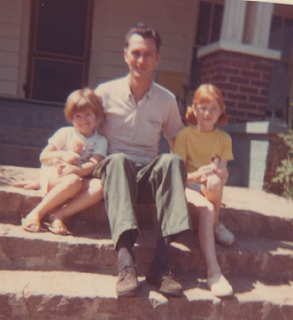 Happy birthday to my dear father who is 78 today.

I don’t think I’ve ever met anyone who has every said a negative thing about my father. People may not have agreed with him for one reason or another, but I have never known anyone who didn’t respect him.

For years he was a manager for a lumber company and had many employees and many different customers from the construction industry. I hung out around Dad’s business as a child and picked up early on that my dad was a respected man who demanded excellence and fairness from everyone around him because he believed in giving those same things himself.

Recently when Dad was in the hospital I spoke with many of his friends who came by to check on him and it was evident how they hold my father in high esteem.

Dad taught his two daughters many interesting things. I appreciate each and every one of them. I know how to paint a room, install insulation, run wire to a circuit box, apply tape and mud to a sheetrock wall, and check my own oil. I can plant and hoe a garden. I know how to walk behind a homemade sled and pick up potatoes as they rise to the surface of the rich red earth.

I can operate a tractor, a riding lawn mower, and a golf cart (complete with a brick so I can accelerate evenly). I can can and freeze any type of vegetable you can think of. I can read a map, navigate all 40 plus versions of Atlanta’s Peachtree Street, and I have a fairly keen sense of direction thanks to Dad’s driving instruction.

I adore Dad’s sweet side. He always took up for his daughters even while acknowledging our faults. During her highschool years Dear Sister was accused of calling her Spanish teacher a bitch. Dear Dad was called to school to meet with the teacher. He assured the teacher he would take care of the matter and that Dear Sister would offer up an apology. He made sure Dear Sister made good on the apology, but he also admitted to her that after meeting the teacher that she was a bitch. I knew of the teacher years later and would have to say Dear Sister and Dad were right.

Growing up Dad had some colorful pet names for us that I won’t repeat here. Thought we acted as if they bothered us secretively we enjoyed the way the names made us special in Dad’s eyes.

I appreciate the fact that Dear Sister and I could not date until we were sixteen. We didn’t miss out on much now that I look back on it.

My father is a thoughtful, careful thinker. I can remember a few times when it seemed like Dad was doing something on a lark, but generally you found out on down through the road of time that he had had a plan all along. You never really know what the plan is, but one thing is for sure….Dad always has long range plans for everything. While Dear Sister seems to have taken after Dad I tend to be the more impulsive and compulsive one.

My father is firm in his convictions and people know what they are. If he thinks you’re wrong he’ll tell you so and why. He’s never one to shy away from a discussion. I am in awe of that. I just want everyone to make nice and get along.

I think it would be honest to say that I have a certain amount of fear where my father is concerned. I believe that a certain amount of fear is a good thing between a child and parent. I’m not talking about the kind of fear you feel because you think you’re going to get beaten or verbally abused. I’m referring to the kind of fear that makes a person want to achieve, the type of fear that motivates someone to strive to be the best they can be, a strange type of love that at times grips you so hard with fear that you can’t help but do the right thing and yet it provides security. It becomes ingrained to the point that you have no choice to do anything else. My father is capable of instilling that type of fear in his children, their spouses, grandchildren, and a myriad bunch of neices and nephews. You can’t be in my father’s life and not at one time or another say to yourself, “What would he do or say in this situation? What would he tell me to do?”

In the community where we grew up Dad knew many, many people. He was always telling us when would would leave house, “Now you do the right thing, because I’m peeking around the corner.” He meant it because if we did anything he would know it from somone. We also heard, “I’ll whip you even if you’re 49 years old.” Well Dear Sister no longer has to worry about that, but I still have five more years to go!

Many years ago Dad had a young teenage employee who decided to squeal his tires in the parking lot. All the young guys thought this was great fun until they notice Dad crossing the parking lot with a rake. He motioned the young squealing tire guy out of car, handed him the rake, and walked off without a word. The young man meekly got out of the car and replaced every piece of gravel where Dad had it. It wouldn’t have even occurred to the young man to argue with Dad about it…..he instilled fear.

I used to go on little outings with Dad to different places. I remember being at a mechanic shop one time where a group of young men were acting their age…they were laughing and throwing around some colorful language. I still remember the sharpness in my Dad’s voice as he reminded the young men that his daughter was present and they needed to watch their words. That action made me feel so loved and protected.

I believe one of the best ways to get respect is to show it. I came to this conclusion early on as I watched my father interact with his father, step-mother, grandmother, and other aging relatives. Dad spent the first half of his retired life taking care of aging relatives. Dear Sister and I got a taste of what he went through when our mother was in a nursing home as we took turns. Dad didn’t have anyone to take turns with and he went every day….sometimes twice a day while his father was still alive. Later, he and my step-mother repeated the process with his aging aunt who had no children. My father endured this process of daily visits for years with a fortitude that I don’t’ think I could muster. I admire him so much for modeling for my sister and I what it means to respect your elders.

Finally, I’ll end Dad’s birthday tribute on a humorous note….As I’ve stated before I don’t know anyone who doesn’t have high regard and respect for my father….any human that is. You see many years ago soon after Dear Sister was married she and her husband acquired a sweet little dog. Nikki was part Pomeranian and part Poodle. He was little, cute, and cocked his head so sweetly. He was my sister’s baby for years until Dear Niece was born. Nikki, the dog. received Christmas presents and my mother referred to him as the Granddog. One evening my father and the dog were in our driveway. I watched dumbstuck as the sweet little granddog trotted over to Dad and politely hiked his leg and peed all over my father’s shoes.

Happy birthday Daddy. I love you!
Posted by EHT at Saturday, February 10, 2007

What a very handsome man. I can tell you are as close to your father, as I am to mine (who turned 75 January 15). It is a rare thing to treasure our parents as much as we do ours. I never understood the commandment Honor Thy Father and Mother because I never knew any other way to treat them. Of course, my parents are worthy of the honor. As is your father. I loved reading all your expressions of him, going to school to talk to the B.tch, teaching your his skills, and the "fear." I, too, have so much respect for my father that I still want to please him.

What a beautiful tribute to your father on his birthday! My father turned 74 in Sept. So, another Dad in the same age bracket. Like belleza, I still want to please my Popi, and he still wants to take care of his little girl.

BTW: EHT, which little girl are you?:)

Awesome....I loved reading the birthday tribute to your dad. (My birthday is the day before his) My dad instilled the same types of values in me as he did with you and your sister. Who I am as a person today is due to his fine teaching. Even though I was the only girl, I still had to 'pull my weight' ~ none of that spoiled girl stuff for him.

I hope you get to have more years with him ~ I really miss mine!

Thanks for the comments ladies. I spent the day with my Daddy Dear today. It was great.

I'm the little girl with the brown hair. Dear Sister has lovely red hair. The picture is taken on the steps of my childhood home.

what a wonderful tribute!

happy b'day to your dad!

I am so glad I got to read this. It was heartwarming. I am glad you two spent his birthday together.

Your father's greatest present and greatest achievement, all wraped up in one, is having a wonderful daughter like you.

I hope you hug him every day.