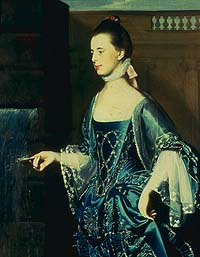 I’ve joined several bloggers out and about who participate in Wordless Wednesdays. My first post was yesterday and can be found here.

I’ll continue posting a historical image on Wednesdays and will follow up with an explanation regarding the historical significance of the image by Friday.

This week’s image is a famous paining by John Singleton Copley of Mary Turner Sargent. A much larger and clearer image of the portrait can be found here. The painting was completed shortly after Mrs. Sargent’s marriage to Daniel Sargent of Boston who hailed from a very wealthy family of merchants and ship owners. Daniel Sargent was a Federalist and served in the Massachusetts legislature for a time and as a state senator. He was also a first captain in the Boston Light Infantry.

Mrs. Sargent was born in Salem, Massachusetts, where many of America’s first millionaires lived. She was born in what is now the House of the Seven Gables made famous by Nathaniel Hawthorne’s 1851 novel by the same name. Per the House of Seven Gables website no papers of [Mrs. Sargent’s] have been found, but the recent discovery of the letter books kept by her niece, Judith Sargent Murray, are revealing important information. In these letter books---in which Judith made copies of her correspondence to family and friends---the letters to or about Mary describe her as a woman of integrity, selflessness, and compassion.

Can you imagine sitting six hours at time for fifteen or sixteen times in order to have a painting completed? There is some evidence that this is exactly what Mrs. Sargent did per one of her sons.

Click on over and examine the larger version of the painting. What do you see?

Many of my commenters yesterday mentioned Mary Sargent’s very long neck. It does look rather strange, but in the larger image you see that she clearly has something tied around her neck. Even with that knowledge her neck is still long. Perhaps she appears to be quite tall and straight because of her undergarments. During this time period women of wealth were taught from a young age about posture. Of course, they wore whale boned corsets so they had no choice at standing up straight. They also had no choice at breathing as well!

We can see from Mrs. Sargent’s posture and placement of her hands that she was a wealthy, refined lady of social standing. Copley used copies of backgrounds from English paintings as well as the positioning of the subject and objects within the painting to give them an English feeling. In the larger version you can see that there is actually cascading water to the left of the painting. One of Mary Sargent’s hands is in the water and you can see she is holding a shell. Remember the famous painting called The Birth of Venus by Botticelli seen here.The shell Mrs. Sargent holds points to Venus who is a symbol of love and beauty while the water represents purity.

Copley may have been chosen to paint Mary Sargent’s image because he had quite a list of clients on both sides of the Atlantic and was well known in wealthy circles. Copley was very skilled at recreating the trappings of wealth in his paintings such as the clothing, the furniture, and of course the lace. Look at Mary Sargent’s arms. Even on-line the lace looks like you could reach out and touch it.

Mary Sargent eventually lost her life to water on the brain. One of her sons was Henry Sargent who became famous for his portraits while another son, Lucius Manlius Sargent was a writer and historian. I knew there was a reason why I was drawn to this family….

At the outbreak of war between the colonies and England, Copley had a decision to make. Should he see the war out in the colonies or the “mother country”? Either way he would alienate half of his customer base. After he was encouraged to study painting in London at the Royal Academy Copley chose to return to England. He never returned to the colonies, but we are left with little treasures like the painting of Mary Turner Sargent.
Posted by EHT at Friday, December 01, 2006

I love The Birth of Venus, but am unfamiliar with this painting or its heroine. You are full of such interesting knowledge! I am quite impressed with the historical base that you have, that you teach us with on your blog.

And, I've been meaning to read "The House of Seven Gables" for quite some time. This gives me more impetus! Have you read it yourself?

Thanks Bellezza. I'm glad you learn something when you visit here. That's my intent. I'm always blessed when I visit you.

Hawthorne was required reading for me in highschool, but it has been awhile. Maybe it's time to reaquaint myself.....When would I find the time though?

I'm about ready for the beach again.

Thanks for sharing, she sounds so interesting. I would never had guessed the tie to House of 7 gables. Wow.
I'm glad I found your blog. Way...

I would be interested to know the source of your comment, "Mary Sargent eventually lost her life to water on the brain."