Was It the Arrostook War? The Lumberjack's War? The Caroline Affair? The Pork and Beans War? Or Was It the Northeastern Boundary Dispute? 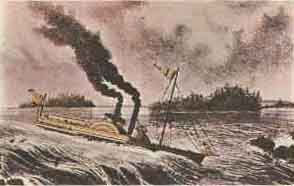 It is possible the United States could ever be used as a staging area for a non-American attack on one of our neighbors? Would Americans allow their sacred ground to be used in order to topple a neighboring government?

Our government uses the land and strategic locations of other nations all the time. We have military bases in many other countries all over the globe.

I guess the question is have other countries, organizations, or groups had military bases here in the United States? The answer is a surprising YES.

My wordless Wednesday image is reposted here. Look at the image very carefully. You see a large vessel going over a waterfall. Here’s a hint….the waterfall is Niagra Falls. Are you wondering about the long title to this post? All of those events have something to do with the picture.

Let’s go back to the years 1838 and 1839 and the presidency of Martin Van Buren. During his watch relations with Britain deteriorated to a very dismal state. One reason had to do with the Panic of 1837 where…..well, that’s another story for another time. I want to concentrate on the historical engraving and the Panic of 1837 can be a side cause to this ship going over Niagra Falls, but I’ll stick to the basics for now.

Part of this story also goes all the way back to 1783 and the Treaty of Paris which ended the American Revolution. Part of the treaty determined the boundary between the newly independent United States and Canada. The main problem area was between the Canadian province of New Brunswick and the territory of Maine which in 1783 was part of Massachusetts. Maine became a state in 1820 and settlers began staking claims even though the British claimed many of the same lands especially those in the Aroostook River valley. In fact, many of the new settlers were actually British who decided to cross the border to claim new lands….land Britain was claiming anyway. Many of the British were lumberjacks who spent part of the year on the Canadian side of the border and the other part of the year on the American side. Because many of land claims were so far away from the authorities many land claims went unfiled and ownership often overlapped.

There was another reason the British weren’t too happy with us during this time as well. Canadian rebels hoping to begin a republic had attacked their home country from bases established in the United States during a time in history Canadians remember as the Upper Canadian Rebellion.

Here is where I will defer to Wikkipedia as they give as good an explanation as any other I’ve seen:

A band of Canadian rebels, led by William Lyon Mackenzie, seeking a more democractic Canada, had been forced to flee to the United Strates after leading the failed Upper Canada Rebellion in Upper Canada (now Ontario). They took refuge on Navy Island on the Canadian side of the Niagra River, which seperates the two countries (between Ontario and New York) and declared themselves the Republic of Canada…

American sympathizers supplied them with money, provisions, and arms via the steamboat SS Caroline. On December 29, Canadian loyalist Colonel Sir Allan MacNab and Captain Andrew Drew of the Royal Navy commanding a party of milita, crossed the international boundary and seized the Caroline, towed her into the current, set her afire, and cast her adrift over Niagara Falls, after killing one American named Amos Durfee in the process. [His body was later exhibit in front of a recruiting tavern in Buffalo, New York.] It was falsely reported that dozens of America were killed as they were trapped on board; in fact the ship had been abandoned before being set adrift. Public opinion across the United States was outraged against the British. President Martin Van Buren protested strongly to London, but was ignored.

On May 29, 1838, American forces retaliated by burning a British steamer SS Sir Robert Peel while it was in US waters. The tensions were ultimately settled by the Webster-Ashburton Treaty. President Martin Van Buren sent General Winfield Scott to prevent further American incursions into Canada. Later that year, Irish-Canadian rebel Benjamin Lett murdered a loyalist captain who had been involved in the incident. As part of the Webster-Ashburton Treaty of 1842, the affair was settled by an expression of regret on the part of Britain that there had not been an immediate explanation and apology for the occurrence.

This incident has been used to establish the principle of “anticipatory selfdefense” in international politics, which holds that it may be justified only in cases in which the “necessity of that self-defence is instant, overwhelming, and leaving no choice of means, and no moment for deliberation.”

Look for next week's Wordless Wednesday History Mystery. Will you be able to guess what it is?

Great history lesson, EHT. If I ever knew anything about this, it had long since been forgotten. And congrats on being a finalist. You got my vote!!!

I knew there were some border disputes at the time, but the rebels and the Caroline had long escaped me as well.

Very cool. I voted and will be back.

Thanks ren.kat! I appreciate it!

I considered Niagra Falls, but thought it just looked like some strong currents. The New Orleans had to deal with rising and falling water levels due to an earthquake at the time, so I thought that might be it. A more telling photo of the S.S. Caroline is here: