A Painting With a Dual Purpose 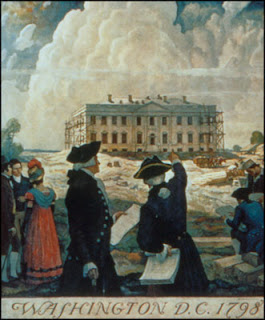 Post Update: Firefly has uncovered a very interesting article regarding the whereabouts of the original painting for this week's Wordless Wednesday. I have emailed appropriate curators at the White House and the museums mentioned in the article and hope to hear back from them soon. This is getting interesting....Please read the entire post and make sure you view the comments as well.

Congrats to A.M. Whittaker and Firefly who placed the proper information in the comments section first.

The painting I featured in this week’s Wordless Wednesday seen here was created by American artist, N.C. Wyeth. It was first commissioned in 1930 for the Pennsylvania Railroad where it was used as a patriotic poster. Unfortunately I was unable to discover if any of the poster images survive or where the original painting is today. I have emailed the Wyeth homeplace and studio to see what they can tell me.

The second purpose for Wyeth’s image came about in 1971, some twenty-six years after Wyeth’s tragic death in a train crossing accident. President Nixon along with his wife, Pat, choose Wyeth’s image for their official White House Christmas Card.

As I researched White House Christmas Cards for my recent post at American Presidents I was struck by the 1971 card and how different the image was compared to other cards. I loved the big, billowy clouds and just the overall painting style made me pause and take notice. Compare this image to other N.C. Wyeth images seen here and here. He had quite a career doing illustrations for children's book and magazines such as Scribners.

Tanya Nichols over at Crafty Girls mentioned in the comments she would come back and print the picture out for her children. This is a great idea. Children need to view art as something to interpret and every painting has more than one meaning.

Inferencing is one of the reading skills I struggle with every year to teach my fourth graders. All of you who commented on my Wordless Wednesday this week did just that…..even if you did it comically….you were inferencing and it is a powerful tool for learning. There is a fantastic N.C. Wyeth painting called The Giant here. It is a great learning tool for kids to experience the “whole” picture. Sometimes you can set your printer to black and white or outline and print a famous painting out for kids to color. They love this.

You can learn more about N.C. Wyeth here.

I'm pleased that some of you seem to be enjoying this little diversion. I had thought about chucking the whole thing, but it would seem it is serving a learning purpose....for ALL of us. :)

Please don't stop! It is fun to look at the art and make inferences about it. I have started using art books with my own daughter as a way to get her to think outside the box. I show her your picture each week, as well as the picture I find for my Silent Sunday posts, which are a take on your WW ones. Keep it up!

I know this is a bit long, but I thought you'd be interested in this article I found a reference to online:

The Perplexing Case of the Vanishing Wyeth

N. C. Wyeth's depiction of the White House being built may have gone the way of the Pennsylvania Railroad, which commissioned it.
By Eils Lotozo INQUIRER STAFF WRITER

When the White House marks its bicentennial next month, the festivities will include a gala birthday dinner, a reenactment of President John Adams' arrival at the half-finished residence, and the unveiling of a new painting of the iconic building by James "Jamie" Wyeth, son of Andrew. But there's another Wyeth work that organizers would dearly love to make part of the celebrations - one that probably once hung right here in Philadelphia. Commissioned by the Pennsylvania Railroad and painted in 1930 by art dynasty patriarch and Brandywine Valley resident N.C. Wyeth, it's a rare image of George Washington in front of a White House still shrouded in scaffolding.

There's just one problem.
The painting, a reproduction of which was pictured on Richard Nixon's 1971 White House Christmas card and could be worth as much as $1 million, has vanished.

"We first started looking for it 10 or 11 years ago, and our interest was renewed because of the 200th anniversary," said White House curator Betty Monkman. "We are trying to contact various people and getting various leads, but so far nothing has turned up." "[N.C. Wyeth] is the only famous artist that has painted a picture of the White House under construction," said Hugh Sidey, a retired Time magazine Washington correspondent and now the president of the White House Historical Association, which is planning the bicentennial events and commissioned the new Jamie Wyeth painting. "We would like to know where [the picture] is," said Sidey. "And ultimately we would like to buy it and include it in the White House collection." White House devotees aren't the only ones looking for the piece, which was part of a series commissioned from Wyeth, then America's premier illustrator, by the once mighty Pennsylvania Railroad. Meant to appear on posters illustrating the theme "Building the Nation," there were supposed to have been 12 images, though only four are known to have been completed. Lauren Smith, curator at the Farnsworth Museum in Rockland, Maine, yearned to include the painting in a show that's currently up at the museum called "One Nation: Patriots and Pirates Portrayed by N. C. Wyeth and Jamie Wyeth." (A smaller version of the show will be on view in the Senate rotunda in Washington in January.) "Jamie [Wyeth] had just painted the bicentennial portrait of the White House, and we really wanted the juxtaposition of the grandfather and the grandson," said Smith. While a few of the posters made from N.C. Wyeth's White House scene still exist, Smith had to content herself with displaying the Nixon Christmas card. Because N.C. Wyeth's original artwork often ended up in the possession of those who commissioned it, the White House's Monkman thinks it likely the elusive painting, titled Building the First White House, Washington, D.C., 1798, once adorned the offices of the Pennsylvania Railroad. The first modern corporation, and the largest company in the United States until World War I, the railroad giant (which had its headquarters for many years at Broad Street Station, across from City Hall) became Penn Central and then, in a massive reorganization in 1976, Conrail. According to Monkman, the last faint trace of the painting appeared in 1976, in an appendix to a list of items being turned over to the new Conrail. "It's listed as having "minor surface damage," said Monkman. "A print would be framed under glass, so it seemed that this would have been the original painting." Yet its whereabouts have never been established. Monkman thinks there's a good possibility that someone who worked for the company simply took the work home, or, perhaps, was given it as a retirement gift. "Maybe someone has it and doesn't realize the significance of it," she speculated. But Christine Podmaniczky, the associate curator of the N.C. Wyeth collections at the Brandywine River Museum, is skeptical of that theory. As part of an effort to produce a complete catalog of the artist's work, she has put serious effort into tracking the four original paintings Wyeth composed for the Pennsylvania Railroad. She has found no trace of them.
"These four paintings have never surfaced," said Podmaniczky, Yet the value of N.C. Wyeth's paintings has been soaring since the 1960s. In recent auctions the artist's canvases have reportedly fetched prices in the $1 million range.
"People have been selling right and left," she said. "If they had been hanging in someone's office or home, at least one of them or several of them would have come to market by now." Podmaniczky, who has a list of 200 Wyeth works she would like to locate, wonders if the Pennsylvania Railroad quartet might not have met the same fate as a cache of Wyeth originals owned by the now defunct Scribner's magazine, which had been an avid commissioner of the artist's dramatic illustrations. Said the curator, "The Brandywine museum has an old Scribner's card file that records a number of N.C. Wyeth works. And across a lot of those cards someone wrote, 'destroyed by fire.' "

I do thank you for the link and by complete coincidence I have a lesson plan for the boxcar children up at Garden Of Praise, love that site! THANK YOU for the link and the service that you are doing in creating this plethora of information...
Thank you and warmest regards,
Tanya
aka craftygirls

Wow, Ms. Q, I'm glad to learn folks are using this with their kids. It gives me a warm, fuzzy feeling in my tummy.....or it could be the eggnog I'm currently drinking. :)

Firefly, this is quite a find of yours. Thanks for delving a little deeper. You get the gold star. I have placed an update at the top of the post and as of midnite tonight I have emailed the curators with the White House, the White House Historical Society, the Farnsworth Museum, and the Brandywine Museum to inquire if the painting was ever found.

If not... we may just have an Internet scavenger hunt project to undertake. More on thisl later as I hear back from folks.

Tanya, I found the garden of paradise site quite by accident...what a find!

According to the White House site, the Smithsonian is listed as the source of the Wyeth work.

I wonder if it is part of the collection at the American history Museum (now closed due to renovation) or the newly reopened National Portrait Gellery and Museum of American Art?
One could also contact various railroad/train museums.

Other than that, keep watching Antiques Roadshow!
A.M.

The curator of the White House, the president of the White House Historical Association as well as the curators at the Brandywine and Farnsworth Museums have been serching for this print as well as three others Wyeth was commissioned to complete for Pennsylvania Railroad for many years. I'm sure the Smithsonian has been checked....what that note may have meant is they have a copy, but not the original comissioned work.

I heard back from one of the museums this morning. The curator advised that the search is indeed on for this unique and important work. I'll be posting more about this later.