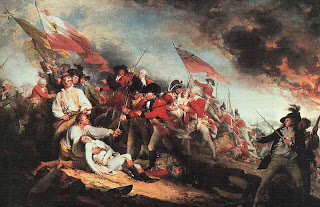 Thanks to everyone who participated in my little game for Wordless Wednesday. Those of you who guessed an American Revolution battle were correct, and those of you who mentioned Bunker Hill were even more correct.

The title of this painting is The Death of General Warren at the Battle of Bunker Hill by John Trumbull. A larger version of the painting can be seen here.

One unique aspect of this painting is the artist witnessed the battle from Roxbury where he was under the command of General Joseph Spencer of the First Connecticut Regiment. Trumbull used sketches he made of the spot at a later time, and many of the likenesses are very acurate since Trumbull obtained other portraits of many of the battle participants to be accurate.

After the shots were fired that were heard around the world at Lexington and Concord the British marched back to Boston…not an easy thing to do with wool uniforms and over sixty pounds of equipment to lug around…not to mention the Rebels hiding behind trees taking pot shots at them.

The next major engagement came when Rebel soldiers postioned themselves on the ridges up above Boston. The British decided to attack and Bunker Hill became a well known American battle. The funny thing is there is a little “bunk” in Bunker Hill because once the fighting began most of the battle took place on Breed’s Hill.

We have short discussion about what “whites of an eye” are, and we pair up and measure out how close someone has to be to really see the whites of an eye. We also discuss why so many of us know that statement yet we really don’t know where it comes from. I tell students that after our discussion of Bunker Hill is complete they will always remember where the statement came from. Many people are given credit with giving the order to the Rebel force. Israel Putnam is given the nod most of the time. The Americans did not have the stores of ammunition the British did. Every shot counted. By waiting until the last possible moment the Americans could as one young man recalled “[mow the British] down like pieces of grass”.

Look at the painting. Notice how the grouping froms a V-shape around the fallen man. Of course, the man on the ground is none other than General Warren. Some sources state, however, his rank of Major General was not in effect at the time of the battle. In fact he he fought as an individual in this battle as he refused command. Warren was actually a doctor and was very active in the Sons of Liberty and the Committee of Correspondence. It was Warren who sent Dawes and Revere on their famous midnight ride.

In Trumbull’s own words he explains the painting, “[It] represents the moment when (the Americans having expended their ammunition) the British troops became completely successful and masters of the field. At this last moment of the action, General Warren was killed by a musket ball through the head. The principal group represents him expiring, a soldier on his knees supports him, and with one hand wards of the bayonet of a British grenadier,…Colonel Small…is represented seizing the musket of the grenadier, to prevent the fatal blow, …Near this side of the painting is seen General Putnam, reluctantly ordering the retreat of these brave men; …Behind Colonel Small is seen Major Pitcairn, of the British marines, mortally wounded, and falling in the arms of his son,…Under the heel of Colonel Small lies the dead body of Colonel Abercrombie. General Howe, who commanded the British troops, and General Clinton,…are seen behind the principal group.”

If you look over to the extreme right of the painting you see Lt. Grovesnor (with the hat and sword) and behind him we see Peter Salem. You can see his image much better in the larger image (see link above). Peter Salem was a former slave who was given credit for shooting British Marine Major John Pitcairn, the man mentioned above who died in his son’s arms.

The British won this battle but paid a dear price. They had over 200 dead and over 800 wounded to the Americans 140 dead and 271 wounded. These numbers vary sometimes depending on the sources, but the British suffered heavy losses. Once the Americans ran out of ammunition many fought hand-to-hand even using their teeth when necessary.

The British knew immediately they had underestimated the Rebels and began to realize they would need more soldiers in the colonies including mercenaries.

It is most amazing to realize that Trumbull had lost the sight in one eye at an early age. Based on that information alone his early paintings are astounding. I find it just as amazing Trumbull could have painted one of the American victories, but painted our first significant loss. In doing this he documented the struggle and the determination of those involved. His snapshot of Bunker Hill has become our national memory of the event. We are fortunate that he was actually involved in the struggle. In a letter to Thomas Jefferson dated June 11, 1789 Trumbull stated, “Some superiority also arose from my having borne personally a humble part in the great events I was to describe. No one lives with me possessing this advantage, and no one can come after me to divide the honor or truth and authenticity, however easily I may hereafter be exceeded in elegance.”

More information about Bunker Hill can be found here

A great resource is Patriots, a middle to high school level novel about the battle. It’s illustrated, has a glossary at the end, and also has a free teacher guide. You can find the book at Battle of Bunker Hill.
Posted by EHT at Thursday, December 14, 2006

I would never have guessed Bunker Hill from looking at the picture. I love learning things when I surf the blogs, and it happens more than you'd think! :)

If you haven't checked out Bunker Hill and the Boston Freedom Trail, I highly recommend it.

Bunker Hill momument is currently under construction right now - I found this out a few weeks ago when I took my 10th grade US History Honors class on a field trip into Boston. :-( Oh well.

hey there teacher (:
Could I ask who exactly were the Rebel Soldiers in the British army? were they american or british?

I had to reread the post to actually see where you were coming from with your question, so if I don't address your specific question please let me know.

At the time of the Revolution the colonist were referred to as Americans, however, there was no such thing as American citizenship, and at all times they were controlled by the gov. of Great Britain.

George Washingtona and many other names familiar to us served in the British army. Therefore when Americans took up arms against the British they were in a sense turning against their own country--Britain. While many Americans at the time had never been to Great Britain and had not been born there they did live in a land that was a British possession. Therefore, when the Americans declared themselves independent and took up arms against the British they were indeed rebels and were in rebellion against British rule. By classifying them as soon it does not mean their cause was unjust.

I usually do an activity during our move from the French and Indian War to the American Rev. where students take the soldiers/officers we identified during the F and I War and we research to see if they remained loyal to the crown or if they fought with the Continentals.

I love the idea of measuring the distance of seeing the whites....

Warfare is a fascinating subject. Despite the dubious morality of using violence to achieve personal or political aims. It remains that conflict has been used to do just that throughout recorded history.

Your article is very well done, a good read.