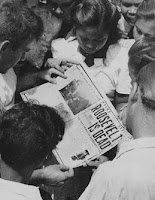 I’ve wanted to write about President Franklin D. Roosevelt’s last days for sometime, and this week seemed appropriate. I had once again reached a point where I was uncertain about my wordless image and what I would post, and I had to look through my research in an attempt to pull something from my….from my…..well, let’s say from my notebook. :)

Time ran out and I had to think quickly on my feet. This can occur when you have a necessary but boring vocabulary quiz planned and you find out the superintendent of schools will be in your room along with other visiting dignitaries in twenty minutes to see something “stimulating.” Luckily my dilemma wasn’t that serious and I’m awfully glad I spent some time during the summer to research various topics. What’s that old Boy Scout motto? Be prepared!

In my wordless image readers were given the assignment to provide me with information about the image, and just like my classroom students they didn’t disappoint me. Readers came up with some wonderful bits of knowledge regarding FDR, and some were so brave to leave a comment indicating they didin’t know anything about the image….well, I’m impressed with their honesty.

In my classroom I appreciate and students learn to appreciate mistakes and the “not knowing” because we are then given a precious gift….the opportunity to learn something.

What a gift to give yourself, eh?

In the responses commentors provided information such as FDR was our 32nd president, he served more than two terms (four actually), led us through the Depression with programs like the CCC, instituted Social Security, and led us through World War II. Roosevelt went to Harvard, had polio, married his cousin, and at one time was Assistant Secretary to the Navy. A couple of Georgia participants reminded us that he had a huge impact on Georgia. I’ve written about his impact before as well some family connections here and here.

The unfinished painting of President Roosevelt was by Elizabeth Shoumatoff, and it represents the last moments of his life since he suffered from a cerebral hemorrage on April 12, 1945 while the President sat for the picture at Warm Springs, Georgia.

Read the ending of my post over at American Presidents.....
Posted by EHT at Friday, November 16, 2007

I've always found it interesting that both FDR and TR not only held the presidency, but were both Assistant Secretaries to the Navy before that. I guess that the interest in the navy ran pretty deeply through that family.

BTW.. thank you for the earlier post on the Campo de Cahuenga. Because of it, I made a point to visit the site when I was in L.A. last week.

I'm so glad you went by Campo de Cahuenga. Was it worth the trip?