Shhhhh.....This Blog Is In Prayer 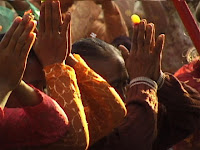 I’m in prayer today, and I hope if you have a notion you are too. However, it didn’t take my Governor to prompt me to prayer. I’ve been praying since early in the summer for a change in our weather pattern and so have many others.

I guess there are those who would be shocked to discover I have prayed in my classroom (gasp!), prayed in the hallways, and even placed my hands over that all important state test before it’s sent in for scoring. I have been known to stand beside a student while he or she is working and place my hand on their shoulder while I say a prayer. Prayer should be a constant activity…..a daily conversation with God.

My daily conversation with God, however, is a silent one. Most students never know I say prayers in the classroom and I certainly wouldn’t gather students and direct them to pray. However, I have given them the opportunity at their suggestion….one such occasion was 9/11 when a student wanted to say a prayer for the people in the towers. The student organized it, made sure everyone knew they didn’t have to join in, he led it, and I silently prayed with them. Sometimes public prayer is necessary.

Gov. Sonny Perdue’s call for prayer has once again placed our state in the forefront for those who like to write off Southerners as simple country bumpkins. You know….those “There they go again…..” types.

Religion is a part of the South and deeply embedded into our culture no matter how many critics want to ridicule it or even deny it. If your family has been in the South for over five generations and have more or less followed the Baptist, Methodist, or just the Christian faith in general there’s a good chance you have a long line of pastors in your family like I do.

It’s hard to shake that kind of dust from your shoes.

I guess some high-falutin’ educated folks manage to educate themselves right out religion even if they have deep Southern roots. I too have been faced to separate fact and faith. It’s a choice they make and I support their choice, however, I hold three pieces of paper that tell me I’m highly educated as well…. yet for me and my house I choose prayer and all that goes along with it.

News stories regarding the Governor’s request can be found here, here, and here.

This post also appears at Georgia on My Mind and Got Bible?
Posted by EHT at Tuesday, November 13, 2007

Amen and thank you for the reminder of how blessed I am to be working at a Catholic University - Prayer is all was in the air.

And I can't type -- should say "all WAYS in the air". You would think after all the student papers I proof, I would learn to proof myself - always learning

A story my former social studies teacher told me (she's not teaching in H.S.)...a few years ago there was a pretty serious line of storms with tornadoes in the area, and the alarms went off and the kids were all in the safe zones, kneeling down, hands over their heads, and one student asks, "Ma'am, I know we're in school and all but can we pray?" and she says, "Child, you bet you can pray and I'm right there with you!"

Has the water situation improved any?

We have been so lucky to get rain when we need it, although I don't think we have gotten as much as normal.

My prayers will be with you & your students.

Well, the ACLU would have a field day with "y'all" around here... no pun intended.

But God bless you and keep it up.

Ask and ye shall receive.....It rained last night. Since we are down 16 inches it will take some time. I don't think I would want all 16 at the same time.

Jesse, I guarantee you here in my state the believers outnumber the non-believers something fierce, and even the believers like me who do feel sep. of church and state is a thing of value, we also realize we are in a SERIOUS situation....people were not at the point of a gun to pray. They had a choice.

I pray for the ACLU everyday!

I like you! :)
We prayed and received a long rain with a downpour or three last night here in North GA.

Hi Rhen! I visited you over at your place. Wonderful site. They showed another pic of Lake Allatoona tonight on the news. It looked like desert wasteland. Soooooo scary!

I hold three pieces of paper that tell me I’m highly educated as well…. yet for me and my house I choose prayer and all that goes along with it.

I love it, great post...great points.