Taking the Time to Give Thanks 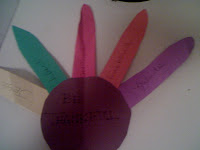 We have this wonderful opportunity at church each month for every Sunday school department to get together for a lesson, and of course, being Baptists the process involves food. We call it Breakfast Sunday.

Various folks volunteer or are volunteered to provide the lesson. This month’s lesson was given by one my most favorite volunteers as he generally provokes me to think. We even had a craft with our lesson which is evident by my picture with this post. We wrote things we were thankful for on feathers and then glued them to the turkey's body. It was nice to come home and place my Thankful Turkey on the fridge. Since my kids are 22 and 14 I haven’t had refrigerator art in some time.:) It’s supposed to be a turkey…..don’t make fun of it, please.

Our teacher’s lesson plan had an opening salvo that depended on everyone connecting to their prior knowledge of the Pilgrims, of course. Being an avid history reader, history reseacher, and history teacher I usually try…..try….to remain silent when historical topics come up because folks-in-the-know can really be boorish people, and I really hate to beat people over the head with what I might know. Truth be told as many can testify once I get started I can’t shut up and then basically I embarrass myself. My children can quote chapter and verse on this….

Our esteemed teacher for the morning asked the question regarding what the Pilgrims had to be thankful for. Why did the Pilgrims give thanks with a great feast? There were several good answers thrown out between bites of biscuits slathered with gravy, but when one particular answer was uttered I couldn’t stand it any longer, and I prayed I could give a statement that would not become a treatise on the Pilgrim’s experience. Praise be! I did ok. My comment was short and to the point, but be warned….I might not be with this post. :)

The answer that prompted me to action was a comment concerning how the Pilgrims gave thanks for their journey across the sea by giving a Thanksgiving dinner.

It is so very easy to speed the story along and think the Pilgrims were unhappy in England, procured a ship named The Mayflower, and sailed for the New World. It’s also very easy to recall the Pilgrims arrived, landed at Plimouth (Old English spelling) Rock in 1620, and the annual holiday was begun upon landing.

There’s so much more to the story…..

The Pilgrims did have a hard time worshipping the way they wanted to in England. Back in the day there was only one church in England and one way of worship. If you didn’t agree you could be made to feel very uncomfortable and ran the risk of being charged with treason since the monarchy was the official head of the Church of England. The Church of England would not have appreciated the blending of traditional and contemporary worship styles that so many churches in my area enjoy today.

So, the Pilgrims did not set off for the New World, but went to Holland where they remained for several years. When they couldn’t obtain the necessary papers to leave their home country they resorted to any means necessary including bribery to book passage. Two attempts to leave England were thwarted and several ended up in jail for a time. Eventually it was only a small group of 150 or so that ended up in Holland. They were happy for awhile, but eventually there were problems. In his History of Plimoth Plantation William Bradford advised the Pilgrims began to have many “discouragements” in Leiden, the Dutch city where they had settled. They were still a small group, and others had been unable to follow them. Many of the older membes of the group had difficulty in obtaining a job, and money was running out rather quickly. The Pilgrim children were being “drawn away by evil examples into extravagance and dangerous courses” as well. In order to keep their own culture intact they knew they must go somewhere where they could be “unto themselves.”

In September, 1620 the Pilgrims set out for the New World. Procuring the right paperwork and obtaining needed investors was not easy. The investors, of course, were looking for a profit and over the many months would express their displeasure at the lack of progress the Pilgrims would make in the New World. Their original destination was not as far north as present day Massachusetts, but an area north of the Virginia colony where colonists had already set up the settlement of Jamestown (1607). The climate had been tested and they had a fairly good idea where they wanted to settle. A terrible storm ended up blowing the Mayflower off course and this is how they came to land at Plimouth in November, 1620.

The survivors along with their Native American friend, Squanto, eventually developed the settlement we refer to as Plimoth and by November 1621, after their first harvest, they did indeed have much to be thankful for.

Looking towards our own Thanksgiving, what do you have to be thankful for?
Posted by EHT at Monday, November 19, 2007

I read "Mayflower" by Nathaniel Philbrook this summer and was enthralled with the "rest of the story" that we didn't learn the first go round. It was fun to go "uh-huh" while reading your post! :-)

I like your Turkey - you did a great job!

I'm thankful for:
*My family
*Friends
*Good health
*A job that I most of the time enjoy
*Ellie the Cat :-)