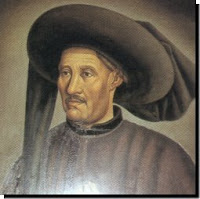 Students examine their maps and make observations. I ask how many students watch the nightly news. A few hands go up….pretty good results for a group of nine year olds. I ask them if they see any of the countries they’ve heard mentioned in the news. They volunteer several. Then I ask students which countries are the most powerful. Some choose the largest countries while others choose the ones they hear repeatedly on the news. Finally, I remind students the time period we are studying is the late 1400s and 1500s. I ask, “Which countries were the most powerful when the explorers began their expeditions?” Some students stated the same group of countries as before. Make sense, doesn't it?

In all the years I’ve completed this exercise I have never had a student identify the country of Portugal, but she was a real powerhouse in the early days of the Age of Exploration. When I ask students to zero in on Portugal they are amazed a country so small in comparison to others led the series of expeditions that would became so rampant in the 1500s by the Spanish and English.

Last week’s wordless image is a wind rose located at Sagres which is supposedly on the grounds of the famed school of navigation funded by Prince Henry of Portugal.

Prince Henry was a prince of Portugal from the house of Aviz. He was the third son of King John I and had a connection to England’s royal family through his mother, Philippa. She was the daughter of John of Gaunt.

Like any person of historical note there are facts and myths attached to his life.

As a young man Prince Henry made a name for himself when in 1415 he encouraged his father to capture Ceuta, a port held by Muslims of North Africa. By taking and holding the port Prince Henry toned down the raids led by the Barbary Pirates against trade ships and Portugal was able to have an inroad to the Saharan trade routes. Prince Henry was always encouraged by the legend of Prester John and wanted to fund expeditions to locate the source of the gold Africans used in trade.

Prince Henry established himself at Sagres Point, also referred to as the end of the word, as this was the last piece of land that was close to the most southwestern point of Europe. From Sagres Prince Henry sent his ships out to trade, explore, and gather data. We can know with certainty he hired cartographers who took the information from sailors and charted land masses. As knowledge grew additional expeditions were more successful because they had up-to-date charts and information.

The process of data mining and data presentation is how many believe the legend of a great school at Sagres began. Peter Russell, in his book, Prince Henry ‘the Navigator’: a Life (2000) presents this theory, and it holds water with me as well.

You can visit Sagres today but there is little there to suggest a school on the grand scale that most texts suggest. In fact, the port Prince Henry used for his expeditions was Lisbon.

Many have said Prince Henry was well educated and had a scientific mind that eventually led to the invention of the caravel. While these are nice and tidy bits of knowledge there is no foundation of any of this in the historical records and some sources such as the writer Azurara had reasons to be biased. He was the chief archivist of the Portuguese kingdom. It would not have boded well for him to write anything that made Prince Henry or his family average.

So, if there was such an outstanding school it would seem the chief historian of the House of Aviz would devote many lines to the description of the school, however, some scholars state that the first mention of the school of navigation that is mentioned in our textbooks today was actually in a 17th Century text of English authorship….The Foundations of the Portuguese Empire by Diffie and Winus.

I would have loved to have had you as my teacher...but wait, I do! Thanks for taking the time and energy to post these little fragments of history. They give me my history fix for the day!!

June, you are too kind. I believe I still have your email to respond to and believe me....I will....eventually.