Sins of the Fathers 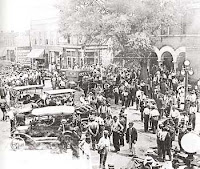 However, as a Southerner I can’t help but be shocked at what my fellow Southerners did in years past. The act of lynching, mob mentality, the celebratory nature of the events, and the braggadocios behavior that followed have haunted and will continue to haunt the South for many more years to come.

When I conducted a casual search for information regarding the word “lynching” I discovered that many people link the word back to Charles Lynch who was a jurist in Virgina during the American Revolution. Mr. Lynch was in charge of punishing Loyalist supporters. I haven’t found any scholarly sources verifying this bit of history, so don’t take my word for it, but it is interesting. If anyone knows of any scholarly sources please send them my way. :)

Of course when the word “lynching” is used today we automatically reflect on the horrific acts across the South though there have been lynchings in every state of the Union but four. Much like floggings, disembowelments, and the decapitations that took place in merry old England lynchings drew a crowd…..a crowd of some of the most powerful and prominent members of a community.

This macabre practice by Southern ancestors gets even stranger when you realize they were proud enough to have their pictures taken with the evidence of their crimes, and even stranger still to realize many of the photographs were reproduced on postcards so they could send them to friends and family members. Sadly, many of these murders were committed against innocent men and women as a result of trumped up charges.

Many of the postcard images have been collected by James Allen. You can see them online at his site called Without Sanctuary. (Warning-----extremely graphic site)

Over at Georgia on My Mind I posted about the lynching of Leo Frank, a Jewish man who was lynched by mob in Cobb County, Georgia in 1915. The picture with this post is some of the crowd celebrating the lynching in the town square at Marietta, Georgia. Recently a historical marker was placed at the lynching site and some of Georgia’s famous sons were there to remember and condemn the horrific events of that day including former governor Roy Barnes…..seems one of his great-grandfathers was a participant in the events that day.

Ever hear of the song Strange Fruit sung by Billie Holliday? The song actually describes the displayed bodies resulting from lynch mob violence. The lyrics go like this:

Southern trees bear a strange fruit
Blood on the leaves and blood at the root
Black bodies swinging in the Southern breeze
Strange fruit hanging from the poplar trees
Pastoral scene of the gallant South
The bulging eyes and the twisted mouth
Scent of magnolia sweet and fresh
Then the sudden smell of burning flesh
Here is a fruit for the crows to pluck
For the rain to gather, for the wind to suck
For the sun to rot, for a tree to drop
Here is a strange and bitter crop.

This site advises Strange Fruit was a controversial song. It was a struggle for Ms. Holiday to incorporate into her nightclub act, but she wanted to include it as her “personal protest” song.

I've been student teaching in an 8th grade Georgia Studies class in an inner-city school. The vast majority of the students in my classes are African American. We recently did units on the antebellum, Civil War, Reconstruction and Redemption periods of GA history. It was SHOCKING what these kids did not know about their race's history. They know what words should make them angry, the N word, the L word that you just discussed, etc. Do they know why they should be upset by those words? No. Do they know why their race was (is?) considered second class citizens? They just know to be angry about it. Sadly, when we try to teach it, they'd rather do anything but learn their own history. Very frustrating as a teacher.

I've read about Mr. Lynch too. I'm pretty sure this can be put in the "fact" column. It's always so interesting to learn the origins of things, sayings, etc.

The lynching of Leo Frank brought about the formation of the Anti-Defamation league by the Straus family and others.

There is a great article about lynching and the complete story of the poem/song 'Strange Fruit' at: http://www.spartacus.schoolnet.co.uk/USAlynching.htm

Lynching is the end product of ignorant and hateful vigilantes. Mobs are easily manipulated into lawless behavior and in some cases, whole countries can be infected; just look at Nazi Germany - where lynching and other atrocities were acceptable and plentiful.

I'm glad that you added Leo Frank into this post; I think it is important for African Americans to understand that there were other victims of lynching and other nations that practiced this barbaric custom.

You might also consider FDR's reaction to the Costigan-Wagner Bill. Another reason I have mixed feelings about FDR.

Anonymous said...
This comment has been removed by a blog administrator.
11:07 PM

I'm starting to post letters written from my family in NW Pennsylvania to my g-g-g-grandfather, who was drafted in November 1864. You might enjoy them.