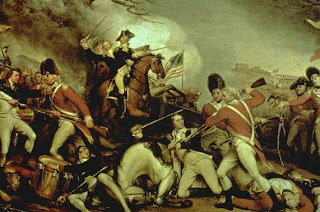 Many students are taught about the same main battles of the American Revolution such as Lexington and Concord, Bunker Hill, Trenton, Saratoga and Yorktown, but many are not taught about other smaller battles. These are just as important and can be very interesting to learn about. Here are 13 lesser known Revolutionary War battles linked to additional information.

Very interesting! We're studying the Revolution right now in American History — this is a valuable and timely TT. Thanks!

I look forward to having time to look all those up. I've bookmarked your site and will return.

Very coincidental! This week I'm working with some fourth graders on studying the Revolutionary War. I think I'm learning more than they are.

Thank you for the list. I intend to make good use of it teaching American History next year.

I actually grew up near Oriskany so knew about that one and a couple of other ones came up when I was quizzing my 13 year old from her 82 index cards of Revolutionary War questions!!!!

I love learning more about US history. Thanks!

There was also the Battle of Long Island.....in what is now Tennessee. IIRC, there was a Cherokee village on a "long" island in the Holsten River which was attacked by NC (Tenn) Militia in response to Cherokee attacks on "white" settlers in western N.C. ( Tenn.)

There was also a shoot-out in Bladen Co., NC between Loyalists and Rebels. IIRC, the Loyalists got themselves pinned down on the banks of the Cape Fear River.

There were also many tiny skirmishes between Loyalists and Rebels throughout the "south" ( North Carolina, South Carolina and Georgia). Many ended with several dead or executed.

Here is a US Civil War trivia question for you: Where was the western-most skirmish between US troops and Confederates ?

After having read all these battles I died on the battlefield with honor, lol !

As you know, I'm a native New Yorker. There is still a lot of colonial and Revolutionary War history in the city.

I knew of Fort Washington because it is where the Cloisters are. An amazing view from the top of the hill (a mountain to us!).

Why are we humans so damn mean to each other? *sigh*

The Massacre of Wyoming's what set me off. Gross!

Happy TT; as always, thanks for visiting West of Mars!

Great post. I love learning about history, I guess that's why I write historical fiction.

Great TT! Thanks for dropping by mine!

I'll have to drop by this site again!

This is definitely the most informative TT i have been too.

That was very interesting - thankyou! It's nice to hear about lesser known events that were still a part of our history.

I taught American History in a high school, and you're right, we do not teach those little battles. To tell you the truth, I do not know much (or have heard of) any of them. Sad, but true!

Thanks for sharing and for visiting my site!