Ask many people about President Woodrow Wilson’s wife and they might tell you things like, “Oh, she’s the one that took over the White House after Wilson’s stroke.”
Yes, some historians refer to the period immedately following Wilson’s stroke in 1919 as the Petticoat Government since Edith Wilson did curtail prying eyes from viewing the stricken president. The First Lady didn’t allow any visitor or document reach the President without her approval. She managed to hold off everyone long enough for Wilson to recover somewhat. However, what we need to remember here is Edith Wilson was the President’s second wife. in this post I’d like to take a look at the “first” First Lady during Wilson’s presidency.

In this week’s Wordless Wednesday I hinted that the painting in question involved a famous artist colony, the city of Rome, and government service. The title of the featured piece is Side Porch, Griswold House, 1910 and the artist is Ellen Axson Wilson, the first wife of President Woodrow Wilson.

The first Mrs. Wilson was born in Savannah, Georgia in 1860, the daughter of a Presbyterian minister. Most of her life was spent in Rome, Georgia’s own version of the city of seven hills. President Wilson also grew up in Georgia, and was also the child of a minister. Your can see his childhood home here.

Mrs. Wilson studied art at the Art Students’ League in New York. The New Georgia Encyclopedia advises she created crayon portraits from photographs and sold them. She often put her art pursuits on hold to run her household, attend to her three daughters, and to be available for her husband as he progressed through academic ranks to finally become president of Princeton in 1902.
In 1905, Mrs. Wilson returned ernestly to her art when her brother, his wife, and their son drowned in a Georgia river. She created a scholarship at Berry College in memory of her brother a

nd sold various paintings to fund it. It was during this time that Mrs. Wilson did her most serious painting. She, along with President Wilson and their daughters, began to spend their summers in Connecticut at the bording house of Francis Griswold. Many Impressionist artists such as Childe Hassam and Frank Dumond stayed with Mrs. Griswold as well, and this community of painters became known as the Old Lyme Art Colony. Today the Florence Griswold home is a museum. Many of Wilson’s paintings bear only the initials E.W. as she did not want to overshadow her husband’s career in any way, however, her works often appeared in one-woman shows, she won awards, and some of her artwork was displayed at the Chicago Art Institute.
It would appear from his correspondence that President Wilson enjoyed the trips to Old Lyme as much as his wife. In his article Woodrow Wilson, A Lighter Side Edmund T. Delaney quotes Wilson from correspondence dating back to 1909 where Wilson advises
“Lyme is one of the most stately and old fashioned of New England villages, and we shall be boarding not with New Englanders, who get on my nerves, but with a jolly irresponsible lot of artists, natives of Bohemia, who have about cleared the air of the broad free world . . . Lyme is a delightful haven in which to sleep, sleep interminably, as I love to do, when I am worn out."
Unfortunately, the trips to Connecticut stopped for the Wilsons once Woodrow Wilson was elected governor of New Jersey. He noted, “if we take a house by the sea, it must be in Old New Jersey, which would not forgive us if we went elsewhere". Thus the family opted to forgo the seashore and settled for the hills of Cornish on the New Hampshire side of the Connecticut River.
Once the Wilson’s reached the White House Ellen Wilson did not give up her art pursuits. She had a studio with a skylight installed in 1913. Many of her biographers quote White House staff members fondly remembering her as calm, sweet, motherly, pretty, and refined. 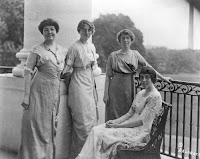 Mrs. Wilson pursued more than just her art as First Lady, however. She worked for the poor in an attempt to clean up the slums of Washington D.C., she organized the White House Rose Garden, and besides the regular round of official duties and dinners she also arranged for the White House wedding for not one daughter but two.
Unfortunately, Ellen Axson Wilson died seventeen months into Woodrow Wilson’s presidency from Bright’s Disease. Currently she is the only First Lady buried in Georgia. She lies next to her parents at Mrytle Hill Cemetary in Rome, Georgia.
This post was also posted at American Presidents Blog and Progressive Historians.
Update: Fellow Georgia teacher, Terrell, over at Alone On a Limb advises the Rome area Heritage Foundation is attempting to get restored portaits of Mrs. Wilson hung at the U.S. Capitol and the state capitol in Atlanta.
He also posted information about Mrs. Wilson’s funeral held in Rome, Georgia. Check out his post to see real pictures of the funeral procession down the main street in Rome.
Posted by EHT at Sunday, March 04, 2007

EHT, you constantly put me to shame. Like so many of your posts, I read this one and thought, "I didn't know that!"

Fascinating!
I need to brush up on my First Ladies and Georgia history!

And I got to learn about two artist colonies through research!

Close, but no cigar for me! I thought it was in New Hampshire and that Childe Hassam figured in somewhere. There is also a Rome, NY!


Rome and government service did figure into this colony as well as a yellow house!

HISTORY
The MacDowell Colony was founded in Peterborough, New Hampshire, in 1907. The Colony's mission today, as it was then, is to nurture the arts by offering creative individuals of the highest talent an inspiring environment in which to produce enduring works of the imagination. More than 250 writers, composers, visual artists, photographers, printmakers, filmmakers, architects, interdisciplinary artists, and those collaborating on creative works come to the Colony each year from all parts of the United States and abroad. Colonists receive room, board, and the exclusive use of a studio. In addition to ideal working conditions, artists-in-residence benefit from the experience of living in a community of exceptional artists.

In 1997, The MacDowell Colony was awarded the National Medal of Arts for “nurturing and inspiring many of this century's finest artists,” and offering outstanding artists of all disciplines “the opportunity to work within a dynamic community of their peers, where creative excellence is the standard.”

In 1896, the composer Edward MacDowell and Marian, his wife, bought a farm in Peterborough, New Hampshire, where they spent summers working in peaceful surroundings. There, MacDowell said, he produced more and better music. MacDowell, a founder of the American Academy in Rome, knew that artists from different disciplines enriched each other's artistic lives, and he and Marian dreamed of making a community on their property where artists could work in an ideal place in the stimulating company of peers. In 1906, prominent citizens of his time, among them Grover Cleveland, Andrew Carnegie, and J. Pierpont Morgan, created a fund in his honor. The fund enabled Edward and Marian to carry out their plan. Although MacDowell lived to see the first Colonists arrive, he died in 1908. It was under Marian's leadership that most of the 32 studios were built. Until her death in 1956, she traveled across the country giving lecture-recitals to raise funds and gain support for the Colony.

Have you seen my WW or FIOF?

Fantastic, fantastic job on this. I was just at the Wilson House, and got to see some of her paintings. I also got my hands on a catalog from a showing of her work back in 1993. She's a fantastic artist, and is unfairly ignored by historians.

You do manage to come up with some fascinating tales, EHT. Thanks for this story from our nation's history. Until I read it, I didn't even know the first "E" existed; I'd heard only about the second "E," Edith.

Thanks for the compliments folks. I appreciate it.

Nonpartisan, I'm jealous. The only painting of Mrs. Wilson's I could find was my Wordless Wednesday. I'd love to see others.

Tour Marm...I'll try to get by today.

Dennis....I got your email and will respond shortly. I'm thinking of our friend. So Sad.

You know, I'm really shy about ever doing this, but I would absolutely kill (er, destroy a historical document or something) to have this posted at my place. Can I get you to cross-post it, pretty please? I'll promote it to the front page and give your site a nice plug.

Wow, nonpartisan. I'm honored. We can't have you destroying historical documents now, can we? I'd love to have a mention at your place.