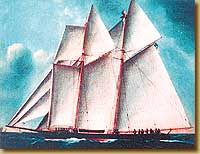 No idea, only guess is it's the Godspeed. I think that's the name of the ship that left with the Mayflower but had to turn back.

Thanks for sharing this photo.
Mine is up too.

Much, much later than the Mayflower, Michael.

I was guessing the Mayflower, but apparently I am wrong in my thinking as well. I will have to wait ...

no clue, but pretty ship

Is that the Bluenose?

bcoz it's the mayflower? maybe...

I would guess that this is the last clipper ship sailed. Or, it's the Cutty Sark.

I remember the Maine and Old Ironsides and from there I'm pathetic.

Does this have to do with the America's Cup? It doesn't look like the first winner, America.


BTW, my WW is a brainteaser!

If it's American I have no idea.

ok, you have me stumpted. Give us some clues!

I was trying to find out what the original La Amistad looked like, but really can't find too much.

I know its not the sloop John B.!

Is this The Wanderer, the last American slave ship?

She's gaff rigged, a 19th century vessel with a single deck. A schooner I think. Built for speed and sailing close to the wind. I cannot see gun ports and though she may be armed she does not appear to be a warship. She is not flying many pennants and I cannot discern her colors.

So, before you gave your clues I was going to guess The Panda, the last pirate ship to operate in American waters (off the east coast of Florida). In 1832 under Don pedro Gilbert she took a prize with $20,000 in silver and regarding the captives the pirate captain remarked: "Dead cats don't mew. You know what to do." Captured in 1834, he and eleven other pirates were hanged in Boston.

But I can't make a New York and Georgia connection, so it must be some other fast ship and I think Tour Marm is right. A slaver makes sense, and the Wanderer was a converted racing yacht, which this ship could easily be.

Thanks for referring your guests to my WW. (I'm getting you back for your Benedict Arnold's Foot post!)

I've lost some sleep with your WW and hoping that my guess is correct. (GreenmanTim thinks so, too!)

The fun is looking up all these schooners and finding out their background stories.

Tour Marm, you and Tim are correct. The yacht is The Wanderer. I'll be posting on it soon.

My time spent visiting the New York Yacht Club and Newport, RI were not in vain!