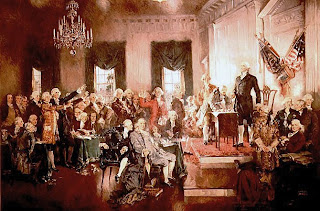 My students have been learning about the formation of the government and thankfully they seem interested. You know they are interested when they don’t want class to stop for lunch. So, in keeping with my current classroom theme here are 13 facts about the Constitutional Convention.

1. The U.S. Constitution was written in the same Pensylania State House where the Declaration of Independence was signed and where Georgia Washington received his commission as Commander of the Continental Army. Now called Independence Hall, the building still stands today on Independence Mall in Philadelphia, directly across from the National Constitution Center.

2. Written in 1787, the Constitution was signed on September 17th, but it wasn’t until 1788 that it was ratified by the necessary nine states.

3. The U.S. Constitutuion was prepared in secret, behind locked doors that were guarded by sentries.

4. Some of the original framers and many delegates in the state ratifying conventions were very troubled that the original Constitution lacked a description of individual rights. In 1791, Americans added a list of rights to the Constitution. The first ten amendments became known as The Bill of Rights.

5. Of the 55 delegates attending the Constitutional Convention, 39 signed and 3 delegates dissented. Two of America’s “founding father’s” didn’t sign the Constitution. Thomas Jefferson was representing his country in France and John Adams was doing the same in Great Britain.

6. Established on November 26, 1789, the first national “Thanksgiving Day” was originally created by George Washington as a way of “giving thanks” for the Constitution.

7. Of the written national constitutions [in the world], the U.S. Constitution is the oldest and shortest.

8. At 81, Benjamin Franklin of Pennsylvania was the oldest delegate at the Constitutional Convention and at 26, Jonathon Dayton of New Jersey was the youngest.

9. The original Constitution is on display at the National Archives in Washington, D.C.. When the Japanese bombed Pearl Harbor, it was moved to Fort Knox for safekeeping.

10. More than 11, 000 amendments have been introduced in Congress. Thirty-three have gone to the states to be ratified and only twenty-seven have received the necessary approval from the states to actually become amendments to the Constitution.

11. Rhode Island was the only state [from the original 13] that refused to send delegates. Dominated by men wedded to paper currency, low taxes, and popular government, Rhode Island’s leaders refused to participate in what they saw as a conspiracy to overthrow the established government.

12. Patrick Henry of “give me liberty or give me death” fame also refused to go. The great orator said, “I smell a rat!” He firmly believed that state governments could protect personal liberties best.

13. George Washington reluctantly attended the Convention. He was suffering from rheumatism, despondent over the loss of a brother, absorbed in the management of Mount Vernon, and doubted the convention would accomplish very much or that many men of stature would attend. He delayed accepting the convention for many months, yet He was the one who was elected president of the convention. As such Washington did not particpate in any of the debate during the months the convention met.

Would you like some information on the men who were delegates from your state? If you live in one of the 13 original states you can find your delegates here.

Well, I learned something new tonight. Don't blog with your bud....links get mixed up and you end up sending people to the wrong place. My link at Thursday 13 takes you to my friend elisheva at Got Bible? She put a link back to me with her post so maybe you'll find me.

Wow! What a great history lesson! Thanks for sharing these facts about the constitution. I am definitely bookmarking your site. It's a keeper for future reading!

Thanks for this post. For one of my college education classes, my group and I are putting together a unit on the Constitution. Would you mind if I printed out this post to use in our unit plan as one of the handouts for the students?

Thanks for the educational TT. This is being added to my American History folder.

Thanks for visiting everyone. Anita, feel free to use anything you see here for your kids. I'd be honored.:)

The National Constitution Center in Philadelphia is a must-see destination for all. It's done well and has great educational programs.

Also, I'm a 'fan' of George Mason, who wasn't mentioned here, but refused to sign the Constitution because it did not have a Bill of Rights. (His home, Gunston Hall, which is near Mount Vernon, is worth visiting and they have a great Bill of Rights program.)

Isn't it interesting that, though the Constitution was prepared in secret, it is one of the most liberally interpreted documents in the world?

Yes, CTG. My students wondered about that too. They simply wanted to be able to discuss all topics freely without rumors spreading. For example, at one point the subject of a king had to be discussed simply to have it hashed out and done away with. It simply would not have been a great idea for that kind of idea to float about. Think about it...our fledgling nation was in "a tight spot". Things could have gone several different ways.

Benjamin Franklin liked to say that three men could keep a secret if two are dead. Yet 55 men attended the convention and not a word leaked.